"Dust to Dust" is the eighteenth and final mission of Call of Duty: Modern Warfare 3, and the final mission in the Modern Warfare trilogy overall. The player starts out in a Juggernaut Suit, and plays as Captain John Price, to assassinate Vladimir Makarov for what he has done.

Price and Yuri, with support from Nikolai, move in to assassinate Makarov in the Hotel Oasis in Dubai. The mission begins with Price and Yuri wearing Juggernaut Suits inside a van while Nikolai taps into the security feed of the hotel. Price and Yuri proceed up the road, fighting a small army of Oasis Security Guards. Eventually they arrive at the entrance to the hotel, walk up an inactive escalator, and enter an elevator. As the elevator rises, an enemy helicopter fires at them. Price and Yuri destroy the helicopter, but it spins out of control, crashing into the elevator the two are in, destroying their Juggernaut Suits in the process. The elevator then begins to fall and the pair must then jump to another lift which Nikolai has hacked into.

Price and Yuri then ride the elevator up to the twenty-seventh floor. Nikolai then informs them to hurry to catch up with Makarov. Pursuing Makarov, the two fight their way around the triangular penthouse, into a diner, past a small stage and into a hallway. The escape-helicopter then appears and fires at them, partially collapsing the building's top floor. Price's guns fall off the edge and he almost falls off. However, Yuri is wounded; a piece of rebar has been impaled through his abdomen, pinning him to the floor. Yuri then tells Price to not worry about him and to stop Makarov. Price then runs up the collapsed ceiling and across the helipad to Makarov's helicopter. Just as it starts leaving the roof, Price jumps onto the helicopter, grabs the pilot by the leg, and tosses him out of the helicopter. The co-pilot draws his USP .45 but Price puts up a struggle, inadvertently firing a shot into the controls. Price proceeds to take out a knife and thrust it into the co-pilot's throat, and throws him out as well. Price then takes control of the helicopter, attempting to prevent it from crashing, but to no avail.

Price awakens to find himself on a glass ceiling that is about to shatter. He notices Makarov, wounded, climbing out of the helicopter, and the pair begin a slow crawl for a Desert Eagle. Price manages to grab the gun, but Makarov stamps on Price's hand, making Price release the gun, and takes the pistol, saying “Goodbye, Captain Price.”, but before he can kill Price, Yuri arrives, just in time, and shoots Makarov with his USP .45, wounding him further. However, Makarov repeatedly shoots and kills Yuri; this allows Price to heave himself off the floor and onto Makarov. After stunning Makarov with a few blows with his fists, Price wraps a steel cord connected to the helicopter around Makarov's neck and strangles him with it. Price is able to break the damaged glass ceiling they are fighting on, causing both of them to fall. Makarov is hanged by the steel cable and is killed instantly whilst Price survives the fall, as he safely lands on the floor below the roof. Price lights a cigar, watches Makarov's hanging corpse, whilst sirens are heard in the background, smokes the cigar, and blows out a plume of smoke. The credits then immediately roll. 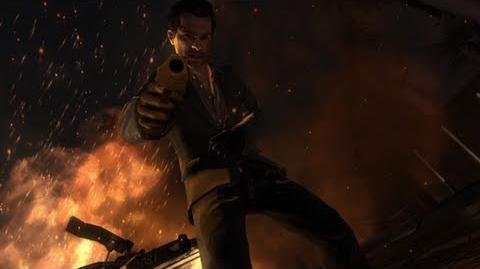 44: After going up the escalator, make a U-turn and look for a bar. The intelligence is on top of the bar.

45: After exiting the elevator, a room with a poker table with the intelligence on it can be found to the left.

46: After spotting Makarov in the lobby and before pursuing him, hugging the wall and going to the right will lead the player into a bar, where the final piece of intelligence can be found sitting on the bar's top. 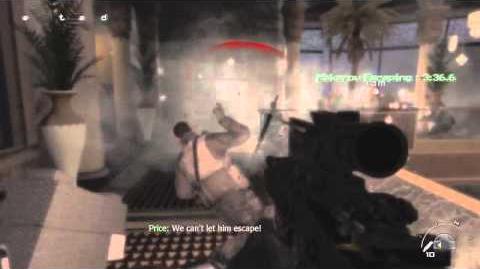 Price pulling out the pilot.

Makarov aiming at Price with the Desert Eagle.

Makarov shoots Yuri in the head, killing him.

Makarov's corpse after being killed by Price.

Price celebrating his victory by smoking a cigar and staring at Makarov's corpse.