"Instead of entering Last Stand the Player goes Berserk for 9 seconds. While Berserk, they are invulnerable and melee damage is greatly increased. Afterwards, the Player is left with 1 health. Cooldown increases with every use."
— Description

Dying Wish is a Perk featured in Call of Duty: Black Ops 4 Zombies. It is unlocked by default and can be obtained through the use of Secret Sauce.

It appears as a Perk Vapor within Voyage of Despair, IX, Dead of the Night, and Ancient Evil, and as a traditional Perk-a-Cola within Blood of the Dead, Classified, Alpha Omega, and Tag Der Toten.

When Dying Wish is selected as the "Modifier" perk and the player has all of their other perks, it will give the Player full health after exiting Berserk mode. 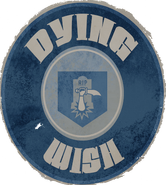