"Enhanced Tactical Humanoid 3rd Revision, or E3N, is the newest addition to the Retribution's crew. The perfect soldier, he is not only stronger, faster, and more durable than any human, but he is also programmed with a personality construct designed to integrate him quickly into any unit."
— Captain's Log.

E3N is designed to be a "one-of-a-kind" tactical soldier bot, capable of human responses and emotions, making it significantly more advanced than the C6 robots, which are little more than mindless drones. Initially it is not accepted by some of the crew members, especially Omar. Omar eventually grows to like E3N.

Before the attack, Ethan was mentioned by an unnamed Petty Officer, that it was already on the roof and ready to fly to the ceremony. At the Raven, Raines mentioned that Ethan was supposed to be introduced at the Fleet Week Ceremony, while Ethan informs that the AATIS guns appeared to be tracking their fleet.

Fortunately, four people including Ethan survived the shot by the AATIS, making their way to retake the AATIS Tower. After retaking the tower and stopping the AATIS guns from self-destructing, Ethan boarded in Reyes' Jackal as a co-pilot and launched to beyond earth's atmosphere to destroy the rest of the remaining SDF Fleet that invaded earth. Unfortunately, after they successfully destroying the remaining SDF Warships, the entire UNSA Fleet was ambushed by SDF's supercarrier Olympus Mons, resulting in only two ships surviving, the Retribution and Tigris.

After being ambushed by the Olympus, Ethan, Salter and Reyes landed on the Retribution. Raines tasked them and the Marines to take back the Lunar Gateway Port on Luna before SetDef could destroy it. Ethan also meets Staff Sergeant Omar for the first time, who didn't like the sight of a combat robot on their side at first, but Reyes convinced him to allow the bot to come along. Ethan helped both Coast Guard and the Marines to take back the facility and save civilians in the process, then got inside a Jackal with Reyes and destroyed the attacking SetDef ships.

Ethan was initially requested by Staff Sergeant Omar to Nick Reyes in the team, In order to take out SDF's Primary Fueling Tower. Omar grows to like Ethan more. Once they landed on the surface, they sneaked through the SetDef's perimeter undetected; They found a good LZ which Ethan says that it is sufficient for two Ravens to land, and called it in. The Raven supplied their Ground force with two SATO APCs, and a C12.

They began their assault on the Refinery. Reyes utilized the advanced targeting system of the C12, while initially eliminating numerous SDF Soldiers, there C12 was disabled by an enemy Mega. The APCs are overpowered by the C12 and seemingly destroyed. Reyes manages to destroy the Mega and Ethan rebooted their C12. While they exit that place, the Olympus Mons entered the moon, slaughtered their ground force and their own C12.

Salter finally speaks to Reyes after having no communications earlier. They managed to fend off Skelters and an A-Jak entered the fight, while the SDF Aces and Fighters were eliminated, the A-Jak was also destroyed. Ethan and Reyes landed in a facility, eliminating all personnel inside, and managed to use the controls. They blew up the Fueling Tower, and the Retribution returned, and attempted to escape the atmosphere. The Mons shot down Reyes and Ethan's Jackal, and the Retribution was pursued in a Navy Cat and Mouse style. While the Retribution retreating, Ethan and Reyes are stranded in space, with Reyes' suit leaking air and almost died, if Tigris didn't rescue them.

"Good luck, Reyes. It's been an honor, sir."
— Ethan's last words before sacrificing itself.

Just seconds after Raines was killed by Kotch, Ethan appeared before Reyes in its Jackal, requesting him to board the Jackal, under the command of Reyes, Jackals launch an assault onto the Olympus Mons, intending to seize the enemy vessel and kill Kotch. The team fights their way toward the bridge, eventually reaching a sealed door that led to the bridge. Ethan suggests that Reyes use a hacking module to hack one of the C6's and wipe out the resistance in the room, Reyes does so and Kotch is severely wounded. Ethan reprograms the remaining C6's and C12's on the whole vessel, placing them under its direct command, and also commands them to salute Reyes as he walked in and stabs Kotch to death. With the supercarrier under their control, Ethan is then ordered by Reyes to fly the ship to Mars.

Once the Olympus Mons arrived, Ethan activated the ship's F-Spar cannon and gave Reyes control of it. Although many SDF ships were destroyed by Reyes with the cannon, a hostile boarding party blew up a section of the ship which disabled the cannon before they were driven off by UNSA troops and Ethan's bots. Ethan began flying the carrier towards the orbital Shipyard with the intent to destroy it via ramming, and the Retribution jumped in to provide cover fire. Both the Retribution and the Olympus Mons were badly damaged, and ended up colliding with each other despite Ethan's attempts to maneuver out of the way. Before the ship crashed onto Mars, Ethan took as many C6s and C12s out of the ship as it could via dropships found inside the carrier, greeting other UNSA survivors. Reyes planned to have Ethan use the bots for a diversion attack and use the still-live cannons on the Olympus Mons wreckage to make it easier for UNSA survivors to board the space elevator to the Shipyard.

Towards the end of the game, locks holding a SetDef destroyer need to be destroyed, in order for the last of the UNSA survivors to destroy the SetDef's shipyard and effectively end the war with victory for the UNSA. To do so, Nick Reyes helps Ethan to the locks (he remotely controls it, as the electromagnetic waves emitted from the locks would've disabled Ethan and prevent it from advancing), and starts attacking the locks. Sadly, bullets alone were not enough to destroy the lock, with Ethan stating "it will need a charge to be set off". Ethan then reminds the captain that its self-destruct sequence will be enough to destroy the locks and free the SDF Destroyer. Ethan then states its last words, and with great remorse, Reyes sacrifices his "brother" for the greater good, successfully allowing for the SetDef ship to be controlled. Ethan's (and effectively, Captain Reyes and the UNSA soldiers) actions were not in vain, however, as the captured destroyer managed to destroy the shipyard, crippling the SetDef fleet and effectively ending the war with the UNSA as the victor.

Controversially, its name wasn't on the wall with the list of fallen UNSA soldiers, despite having pivotal roles. This may be because it is a robot, and that it was never shown to the public. Its successes while serving under Reyes likely inspired the UNSA to build more advanced robots like it, however.

Ethan appears in Call of Duty: Siege as the guide to the player. It helps teach the player the controls and gives a tutorial of the game.

Ethan appears in Call of Duty: Mobile and was added during Season 1: New Order as part of the "Firewall Crate". 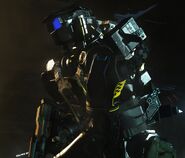 E3N and its robot army before Operation Blood Storm.