The EBR-800 (referred to as M8 in the game files) is an EDI energy sniper rifle that appears in Call of Duty: Infinite Warfare.

As a hybrid weapon, the EBR-800 functions as a semi-automatic sniper rifle capable of converting to a fully automatic assault rifle for mid-to-close range engagements.

When all side missions are completed, the EBR-800 unlocks the Burst Snipe upgrade, which allows it to shoot three rapid-fire bursts after a short charge time. It is also the starting weapon of the level Operation Phoenix by default.

In multiplayer, the Burst Snipe appears as the Epic gun perk Triad, which shares the same function of a charged three-round burst. The perk also gives a custom scope to the EBR, which synchronizes the scope's reticle with the burst.

The EBR-800 is unlocked early on, at level 5. It is mid-of-the-pack in terms of one shot kill potential (in Sniper mode), surpassing the Widowmaker and DMR-1, tied with the TF-141, but inferior to the KBS Longbow. It is a one shot kill from the chest up.

However, this weapon in Sniper mode is more user-friendly compared to other sniper rifles. It has the second fastest fire rate of any sniper rifle but it doesn't sacrifice its one shot kill potential, meaning that deadly rounds can be dispersed in a relatively short amount of time.

Reload times are also mid-of-the-pack and usually not troublesome, but the more aggressive Sniper might want to use Dexterity to hasten this process.

The EBR-800 in Sniper mode can be compared to the TF-141 and DMR-1, because of its one shot kill potential and rate of fire respectively. Compared to the TF-141, the EBR-800 has more idle sway and kick (a factor, given that this weapon is semi-automatic and recoil has to be manually controlled), but the kick is manageable, so shots can be fired off faster than the TF-141.

As well, courtesy of AR mode, this weapon performs significantly better at close to medium range as well. Compared to the DMR-1 the EBR-800 has significantly higher chances of getting a one shot kill but falls short in comparison to the DMR-1's handling traits, which includes a faster ADS time, less recoil, a faster reload time when empty, less idle sway, and a higher rate of fire.

The EBR-800 is commonly used in assault rifle mode, as this mode is far more forgiving than the sniper rifle mode in close to mid range, as well as being easier to use, because this weapon ADS almost as fast as other ARs in this mode.

Despite the sniper rifle mod of this weapon being already fairly powerful, the AR portion of this weapon is also surprisingly good. It has decent range, if not slightly lower than the rest of the ARs, has decent damage, a high rate of fire, and moderate recoil, performing somewhat similarly to the KBAR-32. This means this weapon kills faster than most ARs in its effective range, killing faster than the NV4, Type-2 (AR mode) and R3K but beaten by the harder to use OSA and Volk. This weapon beats out LMGs and other Snipers as well, courtesy of its other mode. Because of this weapon being a Hybrid, AR/SR, it is one of the most versatile weapons in the entire game.

The March 10th, 2017 patch updated the EBR-800 to have reduced idle sway whilst in Sniper mode, and to have an increased range whilst in Assault Rifle mode.[1]

The EBR-800 is available as a weapon from the Magic Wheel in Zombies in Spaceland, Rave in the Redwoods, Shaolin Shuffle and Attack of the Radioactive Thing for $950. In The Beast from Beyond, it is a wall weapon, available for purchase on the catwalk in the Ops Center for $1250.

It is a high damage weapon, being able to kill zombies in one shot until the teen scenes. Interestingly, damage and ammo is the same between both the Sniper and Assault Rifle modes of the weapon; switching to AR mode allows one to kill multiple zombies at the cost of ammo if the weapon is sprayed. Ammo is decent enough to survive a few scenes without a Max Ammo or Upgrading.

However, the weakness of the weapon lies in its very high recoil and idle sway, as well as its sluggish ADS time, causing multiple problems for the player in close quarters. In order to remedy these problems, Quickdraw and Ballistic CPU are attachments that can make the weapon more viable.

The Epic variant of the EBR-800, the Bomber, allows the weapon to perform operate with a charge-up that can be cancelled by letting go of the trigger button before the weapon fires. Damage is similar to the base EBR-800's damage per shot , allowing one shot to kill an enemy.

In Zombies, the Bomber acts differently from its Multiplayer counterpart upon being Pack-a-Punched. When the weapon is used in sniper mode, after the initial charge up, the weapon fires in full auto at a high fire rate similar to the fire rate seen in the burst before upgrading. 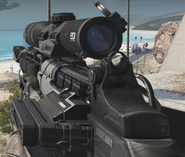 The EBR-800 in assault rifle mode

Aiming while in AR mode 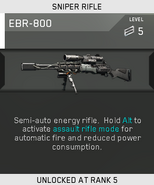 The EBR-800 when unlocked 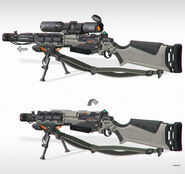