The ELO appears in Call of Duty: Black Ops III with a yellow reticle. is available on all weapons excluding Launchers and Specials, with the only exception being the NX ShadowClaw.

The ELO attached to the Kuda

Aiming with the ELO on NX ShadowClaw

The ELO returns as an attachment in Call of Duty: Infinite Warfare. It functions similarly to the previous iteration, but the reticle can now be customized. The ELO sports a new ability, as it also displays an ammunition counter for the current magazine. It also has a different reticle, featuring a yellow crosshair instead by default.

The ELO is integral to the Type-2 and the HVR, but can be replaced with any optical attachment equipped. The Type-2's ELO does not feature an ammunition counter, however. 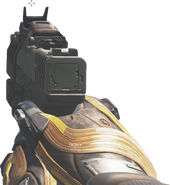 The Kendall 44 with an ELO sight
Add a photo to this gallery
Retrieved from "https://callofduty.fandom.com/wiki/ELO?oldid=2469919"
Community content is available under CC-BY-SA unless otherwise noted.