The EMC (Electro-Magnetic Compact) is a energy handgun featured in Call of Duty: Infinite Warfare.

The EMC is SDF's standard issue sidearm[1] and can be found throughout the campaign. When all side missions are completed, the EMC unlocks the Spread Shot upgrade, which modifies the pistol to shoot a spreadshot blast of energy.

When upgraded the EMC becomes the Star Bright and gains a bullet-seeking effect when hip-firing, similar to the DMR-1 when upgraded[2]. 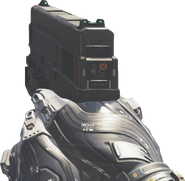 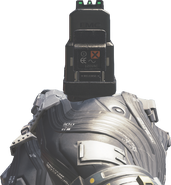 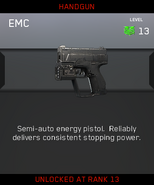 Retrieved from "https://callofduty.fandom.com/wiki/EMC?oldid=2508166"
Community content is available under CC-BY-SA unless otherwise noted.