For the Killstreak with a similar effect, see EMP.

When thrown, it disables enemy equipment and electronics within the blast radius, also lightly stunning enemy targets. The severity of the effect depends on how close the enemy is to the explosion. It explodes about a second after throwing.

It will instantly disable enemy Recon Drones, Sentry Guns, Remote Sentries, SAM Turrets, I.M.S., Trophy Systems, and even deplets Assault Drones of their ammo, and may be used for painting a group of enemies when the player has the Recon perk equipped. It will take multiple EMP grenades to destroy AH-6 Overwatches. The throw time is faster than all other grenades in Modern Warfare 3, similar to the stun and concussion grenades featured in previous Call of Duty titles.

Equipments and killstreak rewards destroyed with the EMP grenade count towards SitRep Pro and Blind Eye pro respectively. Using Assassin Pro will cancel the effects of any thrown EMP Grenade.

The EMP Grenade about to be thrown.

The EMP Grenade being tossed at a Remote Sentry 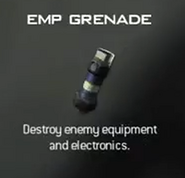 The EMP Grenade in Create-a-Class

Robert Bowling throwing a EMP grenade on the map Piazza.
Add a photo to this gallery

The EMP Grenade is available in campaign as part of the Create-a-Class setup.

It is very useful when comes to disable enemy turrets and drones so the player can destroy them in relative safety in the effect's duration. It is also useful for disabling enemy cloaking.

If the player is caught within its blast radius, their HUD will be scrambled for a short duration.

The EMP Grenade returns in Call of Duty: Black Ops II, and is visually identical to its MW3 counterpart. The EMP grenade will destroy all enemy equipment caught in its radius, along with the Sentry Gun and Guardian. Drones such as the A.G.R. will require multiple EMP grenades to destroy.

Similar to the EMP scorestreak, any players affected by the EMP grenade will be unable to call in scorestreaks. This will not however affect currently active scorestreaks unless they are also within the EMP Grenade's radius.

Unlike the MW3 variant, EMP grenades in Black Ops II are omnidirectional and unaffected by cover. This means that you can destroy equipment and affect scorestreaks through any cover as long as it is within the EMP grenade's radius. Combining this with the Engineer perk can be very useful, and you can disarm a room full of equipment without ever entering it.

The EMP Grenade will also blind people, making for an improvised flashbang/concussion grenade. In addition, players receive ten points and an EMP assist should a teammate eliminate a hostile who was affected by the grenade, much like the EMP scorestreak.

Should the player be affected by an enemy EMP Grenade, the player can throw his/her own EMP Grenade at him/herself to negate the effects.

The EMP grenade also appears on zombies. If the player has monkey bombs at the time and they get the EMP, it will replace them. It is used in a similar way to the monkey bombs. When thrown, the zombies in its radius will be stunned for a short time, and will sometimes aimlessly walk around in circles. These stunned zombies will also be unable to jump. The time zombies spend stunned can be extended if nobody shoots or sprints nearby while they are stunned, which can be very useful. Also, when thrown at a perk machine, it will disable it for a short time. Weapons that are in the Mystery Box will disappear when caught in the blast radius of the EMP Grenade. The Pack-a-Punch machine can also be disabled. Power ups will disappear when an EMP grenade explodes close enough to them. Throwing these near the Bus Driver can also disable him, making the bus stop. Turbines can recharge the Bus Driver and make him able to drive the bus again. Due to these adverse effects, the EMP Grenade may not be very useful in Team or Solo Zombies gameplay, but in Grief mode, this can be a potentially very powerful weapon.

The Lights Of Their Eyes (5

Retrieved from "https://callofduty.fandom.com/wiki/EMP_Grenade?oldid=1864446"
Community content is available under CC-BY-SA unless otherwise noted.