Doctor Edward Richtofen is a sociopath and a sadistic Nazi scientist who is a playable character in Zombies. His player indicator color is green.

"Beware The Doc". A message that was scrawled across walls of every town under Axis control. Starvation may cripple you, dysentery may wreck you, and gunfire may rip the flesh from your bones, but "Beware The Doc".

This is Dr. Richtofen, known affectionately as The Butcher to his victims as they scream in agony moments before he snuffs out their light. All through his career, Richtofen has been at the forefront of torture and information extraction research. Richtofen is an incurable sociopath and sees no moral distinction between natural death and murder; the victim is the victim, regardless of how their demise manifests itself.

Doctor Richtofen has a collection of stuffed animals, most of them posed in positions of terror at the instant of their death.

Richtofen worked under Maxis in Group 935. Unlike Maxis, Richtofen didn't believe in the zombies project and instead tried to create super-soldiers by using element 115 on still-living test subjects. Apparently he was stumped by what he dubbed the "trust barrier", which would stop the test subjects from accepting him as their leader. He also experimented on Samantha behind her father's back. As Maxis' progress slowed due to his infatuation with Sophia, Richtofen decided it was time to act for the betterment of Group 935 (although a hidden illuminati message also orders him) and kill Dr. Maxis. During a teleporter test, Richtofen locked Maxis and his daughter in a room with Fluffy, the first hellhound, and both of them died. Richtofen and his super-soldier test subjects now fight the zombies.

Richtofen in Call of Duty: ZOMBIES. 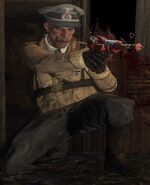 Retrieved from "https://callofduty.fandom.com/wiki/Edward_Richtofen?oldid=1051890"
Community content is available under CC-BY-SA unless otherwise noted.