When the team first arrives in Egypt, due to Javier Ramirez releasing the information about Winslow Accord weak points on the internet, the Army is severely crippled and only a handful of troops and supplies are still available.

While in Egypt, Taylor comments that they are impressed at the army's morale and how they fight on despite the very dire situation at hand, Kane eventually comments that hopefully the Winslow Accord would provide the support that the Egyptians need the same way the team was supported by them.

Eventually the Winslow Accord fulfils the support that Kane had hoped, deploying the Cyber-Ops unit and a team of Winslow Accord Special Forces led by John Taylor and Jacob Hendricks respectively, to rescue Prime Minister Said and Lt. Khalil and other Egyptian POWs from an airfield controlled by NRC forces in Ethiopia.

The Egyptian army is a fairly modern force, with VTOLs, exoskeletons and other modern equipment. However, it does appear to be somewhat lacking in drones compared to its rival, CDP-backed NRC. Egyptian military uniforms are noted to look a little out of date, as Egypt's resources have been strained by climate change driven over-population and their war with the NRC, making updating their uniforms to be a low priority as they require all available resources to be put towards supplies, weapons and ammunition.

However, Egypt's long war with the NRC has taken its toll on the Egyptian army; it is often lacking in essential supplies needed to fight NRC forces. While in 2059 the Egyptian army was fighting on foreign soil, by 2064 it has been reduced to being barely able to defend its own capital. 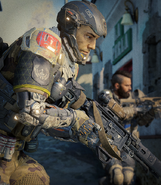