"Uh... uh... that's a- that's a German roadblock! What now?"
— Elder when he is surrounded by Germans during Normandy Route N13.

Private Elder was a soldier in the 82nd Airborne Division who helped Sergeant Moody and Private Martin, as seen during the events of the original Call of Duty.

Private Elder is a young paratrooper of the 82nd Airborne Division. He was at Camp Toccoa in 1942 and went through Basic Training with Private Martin and then was shipped to Southern England for preperation of the Invasion of France. He parachuted into Normandy and linked up with Captain Foley sometime during the night of the invasion with a mixed unit. Later in the morning he helped in the defense of Sainte-Mère-Église against German Infantry, Fallschirmjägers, and Panzers, and played a key role in assaulting a German Fallschirmjäger Mortar Crew. Sergeant Moody then "volunteered" to help him race across German lines to headquarters for reinforcements for the Americans in Sainte-Mère-Église. While at headquarters, Elder, along with Moody, Martin and a platoon of men from the 101st, were ordered to take out a German battery of FlaK 88s near Sainte-Marie-du-Mont at Brécourt Manor.

Elder fought his way through the trenches, assisting Moody and the platoon in the assault. After seizing enemy documents they find a frightened U.S. medic who is breaking down over many of the men getting killed by German MG42 crews and riflemen. When Moody orders him to rescue a wounded man, the Medic was killed by a shot to the head by German gunfire. Moody then bravely rushes in to the field to the save the wounded man. Elder and Martin and the other soldiers in the trenches of the 101st give covering fire for Sgt. Moody. After he returns he orders Elder and Martin to destroy the rest of the FlaK 88s up ahead. Elder and Martin also go into a small village not far from Brécourt Manor to destroy another FlaK 88 Gun, where they encounter more German troops. Then Martin, Elder, Moody and rest of the surviving soldiers return to HQ.

Elder can be considered the "comic relief" of the game due to his behavior, and is annoying to Moody due to his reluctant behavior. Also, he seems to be friends with Martin. 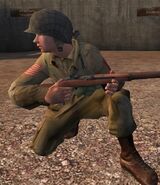 Private Elder at Camp Toccoa during Basic Training in 1942.

Private Elder in Normandy,France June 6, 1944 near Brécourt Manor getting ready for the assault.
Add a photo to this gallery

Retrieved from "https://callofduty.fandom.com/wiki/Elder?oldid=2492259"
Community content is available under CC-BY-SA unless otherwise noted.