Born in 1948, Eleazar was the second child to professors of political science at the American University in Washington, D.C. In 1950, his father accepted a position at the Tel Aviv School of Law and Economics, moving the family to Israel in order to be closer to his own ailing parents. As a teenager, Azoulay stood out for his athleticism and strength, excelling on every team he was a member of.[2]

After four years at Royal Holloway, University of London where he began to go by the nickname "Lazar", Azoulay entered the Israel Defense Forces and was later recruited by the Mossad, Israel's intelligence agency. During his time in the agency, Lazar developed a reputation not only for explosive power, but also for his unflappability.

After years working alongside agents of the CIA, Azoulay decided to leave the Mossad and used his dual citizenship to join the CIA as a Middle East specialist.

In 1981, Russell Adler picked Lazar as one of the operatives he needed to hunt down Perseus. 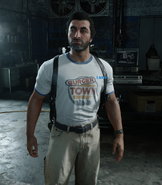 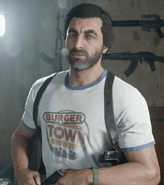