For the successor from Call of Duty: Black Ops 4, see Electric Burst.

Electric Cherry is a Perk-a-Cola machine introduced in the Zombies map Mob of the Dead and is seen in Origins from Call of Duty: Black Ops II in a Perk-A-Cola bottle in the Der Wunderfizz machine, and reappears in the Call of Duty: Black Ops III Zombies maps Der Eisendrache, Zetsubou No Shima, Gorod Krovi, and Revelations. It also appears in the Origins remaster in Zombies Chronicles.

Electric Cherry costs 2000 points to purchase. It creates an electric shockwave around the player whenever they reload that may stun an adjacent zombie. The color for this perk is blue, although the color of the drink is cherry red, and the icon is a red cherry with a lightning bolt.

Contrary to popular belief, the radius of the electric shockwave does not increase cumulatively every time the player reloads; instead, the radius of the shockwave is determined by how many rounds the player has in their magazine. For example, expending the whole magazine will give the maximum shockwave radius and expending only one round from a large magazine will have very minor effects. It is worth noting that since the Blundergat and its upgraded variants (Acid Gat, Vitriolic Withering) only fire one shot or burst at a time, it will always produce a shockwave of maximum effect when using Electric Cherry, making the Perk-a-Cola valuable to have. Also, if the player who bought Electric Cherry goes down, they emit a shockwave blast around the character, stunning all zombies around them for a short time.

In addition, the perk cannot be reload spammed, so if a player stops reloading, and then restarts, they will not receive the effects of Electric Cherry until they fully reload and fire some of their ammo. This is not the case in Call of Duty: Black Ops III.

The Electric Cherry machine is very old and rusted, with no paint job unlike other Perk-A-Cola machines. It is shaped similar to the Quick Revive machine. It has spikes on the sides of the machine, and electric rods on the sides of the perk logo. There is a compartment up the machine filled with Electric Cherry bottles, a Zombie head and hand. The front of the machine has a coin machine and writing which states "5¢", which is unusual as most other machines cost 10¢.

Electric Cherry is unique among the other Perk-a-Colas in that it does not have a known perk jingle. The only map it appeared in as a physical machine, Mob of the Dead, used music box tunes instead of the standard jingles, similar to how Origins used whistles. In an interview with YouTubers at the Call of Duty: Black Ops 4 reveal event, Jason Blundell and Craig Houston confirmed that, before the map had music box tunes, Electric Cherry was originally given a disco themed jingle. It was cut since the jingle did not fit the tone of the map. This jingle has not returned in any subsequent maps since Electric Cherry has since then only appeared in Der Wunderfizz. 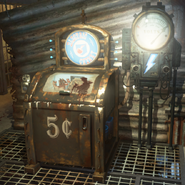 The shock of electricity emitted when reloading with Electric Cherry. 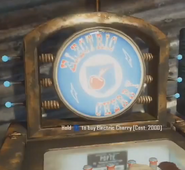 A close-up of the Electric Cherry Perk-a-Cola machine. 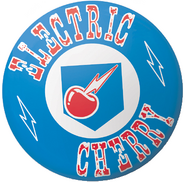 Emblem of the Electric Cherry Perk-a-Cola.

A close up of the Zombie head inside the machine

The HUD icon in Call of Duty: Mobile.