For the enemy in TranZit, see Avogadro.

In Call of the Dead, they are created after being hit by George's electric stage light. They can electrocute the player upon contact.

In Der Eisendrache, they appear in the Rocket Test Fire tunnel after the player activates the switch out in the Rocket Pad when trying to obtain the piece for the Ragnarok DG-4. They can also be created if a zombie is zapped by a Panzersoldat's electric cannon.

In Gorod Krovi, they can be created when zapped by a Valkyrie Drone and a special version of the Electrified Zombie appears in later Valkyrie Drone rounds. The electrification of these zombies cause their eyes to become blue and electricity is visibly flowing through them. While moving at standard jogging pace, these types of zombies do appear to have the same ability as Valkyries, to blind the player's screen, and slow them down when hit.

In Tag der Toten, they are similar to their counterparts in Gorod Krovi, and spawn normally alongside Napalm Zombies, as well as normal Zombies. When killed, they release an explosion of electricity that can damage nearby enemies, as well as the player. 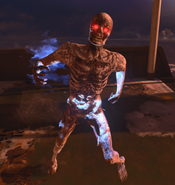 An Electrified Zombie as seen in Call of Duty: Black Ops 4.

Retrieved from "https://callofduty.fandom.com/wiki/Electrified_Zombie?oldid=2528506"
Community content is available under CC-BY-SA unless otherwise noted.