Shard
Elemental Shaft (by Ultimis Nikolai)
The Aether That Binds Them

Part of the Agarthan Device, inert (first half)
Used to power blood collector (second half)

"I just want you to know I've unlocked access to the A.P.D. The Elemental Shard is yours for the taking. You've earned it."
— Rushmore

Creation of the Shard by Ultimis Richtofen

In the Group 935 Siberian facility, in 1945, Ultimis Richtofen used the Vril Vessel to siphon a piece of the soul of his three test subjects, Nikolai Belinski, Takeo Masaki and "Tank" Dempsey and injected them into a processed Element 115 rock. Ultimis Richtofen used his own essence as the fourth soul required. After the souls were injected, the Element 115 rock turned into a shard of glass. Unbeknown to Ultimis Richtofen, by forging their souls to the Element 115, he bound them to the Aether across the dimensions. All their different versions were now connected to the Aether through time and space.

When Ultimis Richtofen was ordered to return to Der Riese, he had to give up the Elemental Shard which was then transfered to Division 9.

Elemental Shard in the United States

After the war, the Element Shard was acquired by the U.S. Army in 1946. The shard was stored with other Division 9 materials at Groom Lake under the authority of C.I.A. Station Chief Cornelius Pernell. Groom Lake was also used to store Element 115 mined in the area.

By 1961, the shard was removed from its storage by Pernell for personal use. When Broken Arrow was established, the shard was used to power up A.D.A.M. Units. The use of the shard instead of regular Element 115 made the A.D.A.M. Units more "alive". By 1964, with the construction of the American Pyramid Device completed, Doctor Hale discovered that A.D.A.M. Units powered by the shard can be used to charge the APD.

Suspecting it was nothing like they have seen before, Cornelius Pernell and Doctor Hale used the Elemental Shard on June 1st, 1964 and resurrected Peter McCain. Over the coming weeks, the Department of Defense forced Pernell to give up the Elemental Shard but managed to break the shard in two, keeping one half for himself.

After years of exposure to Element 115 and after learning about the Aether, Pernell became increasingly obsessed with reaching Agartha. By 1966, he started having recurrent dreams, one of them showing him becoming Avogadro inside the A.P.D. while using the Elemental Shard. The next year, on August 1967, with the help of Doctor Hale, he started experimenting on himself by placing himself inside the A.P.D. and pulling an electrical current from the Elemental Shard to flood the A.P.D.

On March 15th, 1968, George Sawyer and his men arrived at Camp Edward to arrest Cornelius Pernell after Peter McCain filed a report against him. This caused the facility to lose power during one of the experiments transforming Cornelius Pernell into Avogadro. Avogadro was finally contained inside the A.P.D. after Nova 6 gas was released throughout the facility. This resulted in the full lockdown and abandonment of Camp Edward, and the shutdown of Rushmore. The Elemental Shard would remain inside the A.P.D. for the next 60 years.

Not knowing about the first half of the Elemental Shard at Camp Edward, the Department of Defense gave the second half of shard back to Broken Arrow in 1973. Ten years later, in 1983, Broken Arrow began experimenting on live animals using the shard, creating the Bios. On June 24th, 1986, a containment breach involving the Bios occured at the Broken Arrow facility located in Province 22, China. Russman was one of the few to escape alive and shut down the facility. He then reported to Broken Arrow that the shard was lost and the facility was abandoned and its projects transferred to other locations.

Exactly 10 years later, on June 24th, 1996, Victis (Samuel J. Stuhlinger, Marlton Johnson, Abigail "Misty" Briarton and Russman) arrived through a portal in the abandoned Province 22 facility and retrieved the second half of the Elemental Shard before departing through another rift.

Victis arrived at Zero Base and used the Elemental Shard to power up a device that collected their blood and allowed them to access the Empty Earth.

After Primis (Nikolai Belinski, Edward Richtofen, "Tank" Dempsey and Takeo Masaki) freed their Ultimis selves from Groom Lake in 1963, they all traveled to Camp Edward in 2025 as part of Nikolai's plan to retrieve the first half of the Elemental Shard.

They turned the power back on in the facility and restarted Rushmore which helped them recovering the shard. After a fight against Avogadro which led to its transfer to the Hanford Site, Primis and Ultimis recovered the Elemental Shard.

After cheering and drinking around a campfire, Primis Nikolai poisoned Ultimis and Primis. Ultimis Richtofen survived the poison and turned back into Undead Richtofen. Primis Nikolai asked Undead Richtofen to contact and awake Victis. Victis was then transported to the Group 935 Siberian facility where they built, with the help of Pablo Marinus, the Agarthan Device using the Elemental Shard. Once built, Victis sent the device to Primis Nikolai.

Using the Elemental Shard inside the Agarthan Device, Primis Nikolai destroyed the Summoning Key and the multiverse. 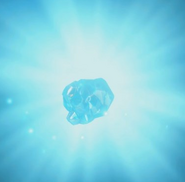 The Elemental Shard outside of the A.P.D.

Russman and Marlton Johnson retrieving the second half of the Elemental Shard. 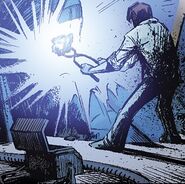 Marlton using the second half of the Elemental Shard to power up the device. 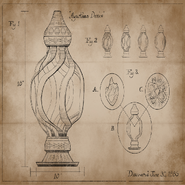 The Elemental Shard in the schematics for the Agarthan Device 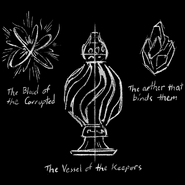 "The Aether that Binds Them" 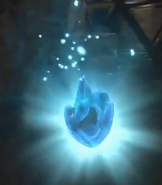