For other uses, see Scarecrow.

Gabriel Rorke with a MP-443 Grach

Two shot wounds depending on player in Sin City

Captain Elias T. Walker (Callsign Scarecrow) was the tritagonist in Call of Duty: Ghosts and the playable character in Legends Never Die. He was a retired U.S. Army Captain prior to the ODIN strikes and the acting commander of the Ghosts.[1] He was also the father of David and Logan Walker and the original handler of Riley. He was also a customization option in Multiplayer and Extinction.

At a point following his passing of the minimum age of eligibility, Elias T. Walker joined the United States Army. Prior to Operation Sand Viper, he may have worked with the 1st Cavalry Division which could be shown in the first picture in his dossier. Following that was him joining an unknown Tier One unit with Rorke, Keegan, Merrick and Ajax on a mission to save the hospital's occupants. During the mission, fifteen of the sixty remained with one leading the hospital occupants away. Elias later married an unknown woman and had two sons, David and Logan. Afterward, his wife passed away. According to his audio file, Captain Walker was nominated throughout his career for the Congressional Medal of Honor, multiple Silver Stars and Bronze Stars. However, he declined them all preferring to remain anonymous.

In early 2005, sixty men from Tier 1 teams are deployed to protect a hospital and it's occupants from five hundred enemy fighters. After three days of vicious fighting, the sixty men are cut down to fifteen. Among them are Elias Walker, Thomas Merrick, Keegan Russ, Alex "Ajax" Johnson and Gabriel Rorke. They decided to evacuate the occupants led by one of the remaining Tier 1 operators. The other fourteen returned to the line and stayed beneath the bodies of their fallen brothers. When the enemies arrived, they fought with their weapons, their knives and eventually their fists. The remaining soldiers attacked so fiercely and so quickly that they defeated their enemies. This led to the formation of Task Force: STALKER, but unofficially known as the Ghosts.

Two years prior to the ODIN strikes, Captain Gabriel Rorke convinced the US president to authorize a surprise attack on the Federation of the Americas and assassinate General Diego Almagro. On July 8, 2015, Lieutenant Elias Walker joined Captain Gabriel Rorke, Sergeant Thomas Merrick and Private Alex "Ajax" Johnson fought in Caracas, Venezuela. During the mission, Almagro destroyed the dam, flooding the city and killing the US soldiers, civilians and his own men as an act of last resort. Rorke, Walker, Ajax and Merrick survived the flood. Despite being advised by Merrick to fall back, Rorke kept on going, claiming that he would vow revenge for all of the American soldiers that Almagro killed. As they finally boarded Almagro's escape helicopter, the squad engaged in a fierce fight with the Federation soldiers and Almagro himself which Rorke managed to overpower as Elias killed him with his P226 pistol. As the helicopter crashed, Elias tried to save Rorke from falling off and meeting his doom as the debris was stuck in between them. However, because the helicopter was too damaged to carry all of them, Elias made what he claimed to be the hardest decision by letting Rorke go and eventually saving the others. The Ghosts spent weeks trying to find Rorke's body, but they did not realize that the Federation found him first and began brainwashing him, using Elias' betrayal as motivation to kill the Ghosts.

While telling the origin story of the Ghosts to his sons in San Diego, he walks with Hesh and Logan back to their house. As they walk through the park, tremors shake the ground. After several more tremors, they run back to their house and spot a gigantic ash cloud over San Diego accompanied by powerful tremors. They run through their neighborhood as Elias recognizes the scenario as an ODIN strike. Elias leaves his sons to go get their truck while they wait at the house for him to pick them up. After the rod destroys San Diego and devastates their whole neighborhood, Elias helps Hesh with carrying an injured Logan to the truck. As Elias drives them away, Hesh and Logan view the destruction as the ODIN Space Station strikes San Diego and the rest of the United States, breaking the truce between the United States and the Federation.

In the ten years after the ODIN strikes, Captain Elias Walker commands the remnants of the military and protects the civilian refugees behind the Liberty Wall, a massive concrete wall separating the United States from the Federation-occupied Mexico to the south. He coordinates the scout teams defending the Wall from Federation squads and the Ghosts in No Man's Land, which is the wasteland surrounding San Diego following the ODIN strikes. He sends Hesh and Logan outside the Wall into No Man's Land to investigate the significant presence of the Federation. After discovering Rorke is alive and operating for the Federation, Captain Elias Walker coordinates the U.S. forces in defending Fort Santa Monica during Operation Homecoming, an offensive campaign to eliminate the American forces at the U.S.-Mexico border and allow access to the rest of the country. However, the military cannot hold the line and they fall back from the beach. Hesh, Logan and Riley go looking for Elias at the command base. However, Logan is nearly killed by a Federation soldier before Hesh kills him and they are extracted by the Ghosts via helicopter. While on the helicopter, Elias reveals himself to be a Ghost and initiates his sons to join him as one of the Ghosts.

After the Ghosts successfully capture Rorke from the Freeport in the Gulf of Mexico, Elias begins interrogating his former teammate about why the Federation is interested in the ODIN satellite crash in San Diego. Unfazed by his techniques, the Federation suddenly appears and captures the plane in mid-air, extracting Rorke and dropping the Ghosts straight into the jungles of Yucatán in Federation-occupied Mexico. Elias survives along with the Ghosts and he guides Logan through several Federation patrols in the crash site until they eventually fight their way to be extracted by Mako Two-Three.

After being captured by the Federation while in their Las Vegas safehouse, Rorke ties Elias, David and Logan Walker and begins to brutally interrogate them. Rorke asks for Keegan, but Elias refuses to tell him anything, and in retaliation, shoots Logan. Elias replies that he was never a Ghost; Rorke beats Elias as he asserts his superior rank. Logan breaks free and grabs Rorke's MP-443 Grach, but in the struggle Rorke pulls the trigger, shooting Elias. Rorke knocks down Logan and shoots Elias multiple times, then kicks him to the ground. Elias reassures Logan, and proclaims his pride of him. Rorke pins him, puts his gun on his head, proclaims that he is the Ghost killer and pulls the trigger, instantly killing Elias.

"It was a different time, a different enemy. Sixty men, from Tier One teams, were sent to face down a force of five hundred enemy fighters. Their objective: To force the enemy back from a civilian hospital, and keep its occupants alive. For three days, they held their ground, but the enemy's numbers were too great. The sixty were cut down to fifteen. They wouldn't last another night, and the enemy knew it. Under the cover of darkness, they evacuated the hospital, sending only one of their own to lead the way. The rest returned to the line, and took up position beneath the bodies of their fallen brothers. As they lay and wait, the blood from the dead poured over them. The sand stuck to their skin like a shroud. Changing them. Annointing them. When the enemy drew near, the remaining fourteen rose out of the desert sand. They were like hunters that couldn't be seen, using stealth their enemies couldn't defend against. When the men ran dry of ammunition, they used their blades, and when the blades ran dull, they used their hands. When the dust and sand had settled, only one of the enemy had survived. He was picked up in the desert, wondering aimlessly, traumatized. He expressed warnings to others of a force so menacing and unbeatable, it could only be described as supernatural. He called them... 'Ghosts'."
— Elias' narration in "Ghost Stories", telling his sons how the Ghosts were born.

"I made the hardest decision of my life. I let him go, and saved the others."
— Elias to his sons, about letting go of Rorke in Legends Never Die.

"You were never one of us. You're not a Ghost."
— Elias to Rorke about when he is being tortured by Rorke.

"I'm proud of you, Logan. Everything's gonna be...okay."
— Elias' last words, before he gets killed by Rorke in Sin City

Elias before his death.

Elias interrogating Rorke in "The Hunted".

Elias trying to save Rorke. 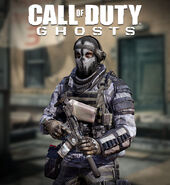 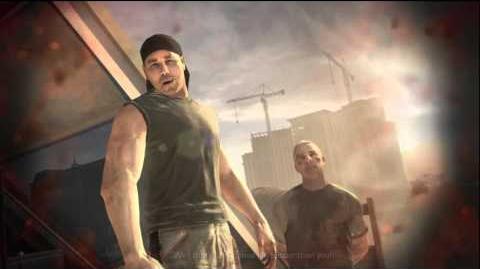