For other uses, see End of the Line.

"Infiltrate the weapons factory to find out what the Federation has been building."
— Mission Description

"End of the Line" is the thirteenth campaign mission of Call of Duty: Ghosts. The mission involves the Ghosts storming a factory occupied by the Federation to find out what kind of weapon they are building.

With the LCS at the bottom of the ocean, nothing stands between the Ghosts and the weapons factory. Elias sends in all five Ghosts to the factory to find out what kind of weapon the Federation is building.

The player takes the role of Logan Walker. He and Merrick silently take down two guards before moving to the factory. Before regrouping with Keegan, Hesh, and Kick, Logan takes down another guard. Kick leaves the team to obtain a vehicle for exfil. They then move into the factory, shortly after taking down several guards. Logan can follow either Hesh, Keegan, or Merrick through three routes that all lead to blast-doors. Each route involves silently killing guards. Once Kick opens the doors, they enter what is called "The Black Zone" on the other side. Their cover is immediately blown, and they neutralize several guards. Later, they discover what looks like space-based weaponry. When Logan and Hesh take a video of it and scan it, they find out that the Federation is building a kinetic-rod delivery system, based on the design of ODIN (Orbital Defense Initiative). The rods are smaller, but there's more of them. After obtaining the information, Elias orders an airstrike on the entire complex, and the team begins to hack a computer for more information. But before the hacking can be completed, the team is ambushed by a large enemy patrol. They use smoke grenades to blind them and take down most of them with the help thermal-imaging goggles. But the goggles are fried by flashbangs and they are forced to remove them. Fortunately the smoke clears and the Ghosts neutralize the soldiers. They fight their way to a parking lot, where Kick rescues them. As the Ghosts escape the factory, it becomes leveled by the airstrike Elias ordered.

Main article: End of the Line/Transcript

Advancing on the factory.

Regrouping the the Ghosts.

Opening the sliding door after taking out the soldiers.

Past the sliding door.

Logan clearing out the rooms with Hesh while going through the factory.

Logan stabbing a guard while clearing out the rooms.

Finding a vault door that possibly houses what the Federation is building.

Moving through the vault door once it is opened by Kick.

Continuing further into the factory.

Finding what the Federation was trying to keep from the Ghosts; LOKI.

Logan looking at the Rods through a cam.

Moving up from LOKI.

Logan getting a USB ready to download all the information from one of the computers.

The power goes out in the room, but remains on in the factory.

The enemy entering the room. Merrick dispatches one of them as they enter.

The Ghosts defending their position after the breach.

Some Ghost members throw smokes out to blind and disorientate the enemy.

Logan putting his Thermal Goggles on to see through the smoke.

Advancing on the enemy position to escape the factory.

Moving forward for an escape.

The Ghosts are then spotted by a helicopter. 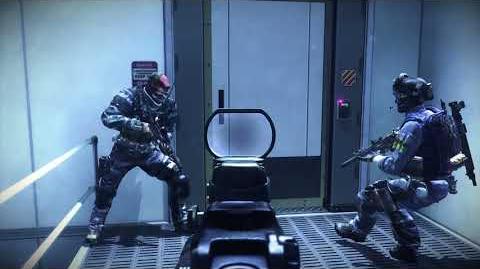 Call of Duty Ghosts Walkthrough - End of the Line (Part 13)
End of the Line
Add a photo to this gallery
Retrieved from "https://callofduty.fandom.com/wiki/End_of_the_Line_(level)?oldid=2489591"
Community content is available under CC-BY-SA unless otherwise noted.