Call of Duty Wiki
Register
Don't have an account?
Sign In
Advertisement
in: Call of Duty: Black Ops Assault Rifles

The Enfield is a fully-automatic bullpup assault rifle featured in Call of Duty: Black Ops.

The Enfield is Hudson's primary starting weapon during the level "Rebirth". It has the ERDL Camouflage with an Infrared Scope and a Masterkey attachment; this scope is useful for seeing enemies through the loose Nova 6, as it picks up thermal signatures that cannot be blocked by the gas.

The Enfield is the second Assault Rifle unlocked in the game, unlocked at level 5.

The Enfield is a low damage per bullet assault rifle. At any range short of 37.5 meters, the Enfield will deal 35 damage, taking three bullets to kill to both the head and body. Damage linearly decreases until fifty meters, where the Enfield will deal 25 damage, taking four bullets to kill, or three with a headshot. The Enfield must headshot to get a one shot kill in Hardcore game types after 44 meters, but will one shot to any part of the body when the enemy is less than 44 meters away. The Enfield also has moderate penetration power, but due to its lower damage per shot, it is not as well suited to shooting through surfaces compared to other assault rifles.

The Enfield's accuracy is quite good. The iron sights are quite clean, and the recoil tends upwards and rightwards, with minimal recoil leftwards and downwards. The Enfield's moderate fire rate and 1500 centerspeed mean that the Enfield should be relatively easy to control.

The Enfield's handling characteristics are above par for the assault rifles. Most notably, the Enfield is the only assault rifle with the SMG default aim down sight time of 200 milliseconds. The Enfield has a moderately sized hip-fire spread, and moves at 95% of the base speed.

The Enfield will partially reload in 2.45 seconds, or 3 seconds for an empty reload. In either case, the Enfield can be reload canceled after 1.75 seconds. These reload speeds are slightly above average amongst assault rifles. In tandem with the enhanced aim down sight time, the Enfield can be used comfortably without Sleight of Hand or its pro version, but it'll still be a very welcome addition.

The Enfield has a default thirty round magazine, and ninety bullets across three reserve magazines when the player spawns in, for a starting ammo loadout of 120 rounds.

The Enfield has the standard assortment of assault rifle attachments on offer. Extended Mag will increase the Enfield's magazine capacity to 45 rounds and split the ammunition across three magazines instead of four. Keep in mind that the third magazine will only have thirty bullets in it. The Enfield will reload less frequently as a result.

Dual Mags adds an alternating second reload, taking 1.6 seconds for a partial reload, a 2.2 second empty reload, and in either case, a reload cancel speed of one second flat. Although the reload cancel speed is among the slowest among Dual mag assault rifle reloads, it is still a large improvement over the regular reload speed, and two additional magazines are provided on spawn, making the player spawn in with 180 rounds instead of 120. Dual Mags is a very useful attachment all around, and is no exception on the Enfield.

The Red Dot Sight and Reflex Sight provide an alternative sight picture for the Enfield. The weapon's viewmodel when aiming with either sight is very minimal, allowing for easier tracking of targets. Since these attachments only provide a cosmetic alteration, some may avoid these for other attackments.

The Infrared Scope will highlight enemies without Ghost Pro and provide a high level of magnification, but definition of the environment is reduced, and the idle sway is increased immensely. The Enfield does not get a centerspeed modification when using the Infrared Scope, unlike many other assault rifles. The Infrared Scope's trait of adding extra idle sway make this quite a poor attachment.

The Masterkey provides a boost to close quarters prowess, but blocks users from equipping a second attachment via Warlord. The Masterkey itself isn't a reliable shotgun, and some may find it to be too inconsistent to use over other attachments, but the Masterkey can be useful.

The Suppressor reduces the Enfield's range immensely, as damage will start to drop off after 12.5 meters and completely drops off at 25 meters, but provides stealth when firing and reduces muzzle flash when firing. The Enfield isn't a bad choice for the Suppressor, but the Suppressor itself can be quite disadvantageous against savvy opponents.

The Enfield in first person 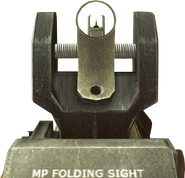 Diving with the Enfield

An early version of the Enfield 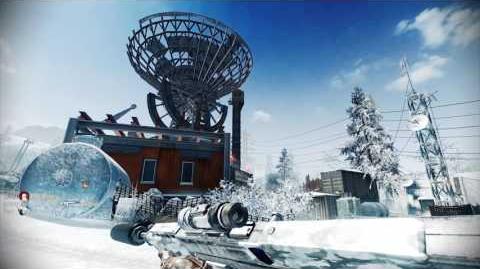