Call of Duty Wiki
Register
Don't have an account?
Sign In
Advertisement
in: Call of Duty: WWII Handguns

The Enfield No. 2 is a revolver featured in Call of Duty: WWII.

The revolver is holstered by Joseph Turner and Vivian throughout the campaign. Later, it is taken from Turner and used by Ronald "Red" Daniels in the level "Hill 493". During the mission ending cutscene, Daniels briefly gives Turner's Enfield No. 2 to William Pierson, but the latter refuses to keep it and hands it back to Daniels. Additionally, Colonel Davis has the weapon holstered in mission cutscenes and in Headquarters.

A differently modeled Enfield No. 2 was added to multiplayer in the second update of The Resistance update on February 13th, 2018, alongside the Reichsrevolver.

The Enfield No.2 is a high damage pistol, dealing 50-40-30 damage depending on range. The revolver is quite similar to the M1911, with identical damage profiles allowing for potential two-shot kills, but the Enfield boasts better range and maintains its two-shot ability farther than the M1911. The Enfield has a slower firecap however. If used with the Duelist basic training, the Enfield can instantly kill enemies if both triggers are pulled and both bullets hit in close range, having a similar time-to-kill to shotguns.

Handling is excellent, per pistol standards, but is a mixed bag in some areas. The Enfield boasts a fast reload for a revolver, useful considering its small six-round cylinder and lack of the Extended Mag attachment. The revolver's most glaring weakness is its severe recoil. The Enfield's sights rocket upwards with each shot, leading to severe accuracy problems even with the slow fire rate.

Attachments are limited, as Extended Mags and Rapid Fire are unavailable on the revolver. High Caliber is useless at close range as the Enfield No.2 does not benefit from the granted 1.5x damage multiplier within its two-shot kill range. The Enfield and M1911 are often compared to each other, and for good reason. They fill the same niche of being two-shot kill pistols, but still have differences. Compared to the M1911, the Enfield boasts a noticeably farther two-shot kill range, but has lower ammo capacity, restricted attachment options, a lower firecap and even worse recoil. Compared to its peers, the Enfield No.2 sacrifices versatility and reliability for unmatched damage.

After the second Resistance update, the Enfield No. 2 can be selected as the player's initial starting weapon if a variant is unlocked and the player is level 45. It can also be obtained from the Mystery Box on The Final Reich, Gröesten Haus, The Darkest Shore, The Shadowed Throne, Bodega Cervantes, U.S.S. Mount Olympus and Altar of Blood for 1000 Jolts. In The Tortured Path, it may be obtained in the starting weapon Waffenbox.

Damage is high for a pistol, but considered low compared to other weapons. The Enfield can effectively kill zombies until wave 10 and after which will start to drop in effectiveness. Reloads are not an issue, allowing to Enfield to output its damage at a constant rate. Ammunition is standard for a revolver; 6 rounds. Although the 6 rounds may not be very favorable, the 6 rounds can do some serious work, especially with Kugelblitz. One may consider using Akimbo as an attachment as the damage output for the Enfield is doubled and the ammo capacity will not suffer too much due to the increased ammo consumption.

When upgraded via the Ubersprengen or by Mk. II Freefire special mod, it becomes the Bulldog, tripling its chamber size to 18 rounds, increasing its damage and ammunition reserve capacity. Damage is one of the highest of pistols and perhaps one of the higher damage weapons in the game, being able to kill in a single shot at around wave 15 but will be able to easily kill enemies with the use of Kugelblitz as the increase in damage and rate of fire can be used to output a large amount of damage although the firecap is still present albeit increased. Recoil is reduced, enough to put multiple shots on target when rapidly firing. The Enfield No. 2, as well as the Reichsrevolver, Gewehr 43, 9mm SAP, GPMG, Sten, Orso and Volkssturmgewehr, are the only weapons to not have their attachments, variants or customization reset when prestiging in Nazi Zombies.

A special variant called the Raven Claw can be unlocked in the map The Frozen Dawn. It is visually identical to the "Repeller II" Heroic variant of Enfield No. 2. When upgraded via the Ubersprengen, it becomes the Raven Eye, increasing its damage and ammunition reserve capacity. When a zombie is killed with a headshot, a crow will fly above it and kill up to 5 nearby zombies. The chamber also gains a new bullet for every headshot with the Raven Eye. 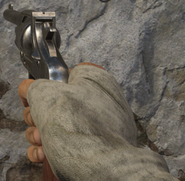 The Enfield No. 2 in first person

Inspecting a side of the Enfield No. 2 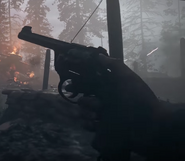 The campaign version being drawn 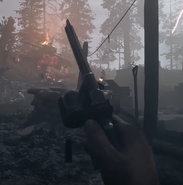 Reloading the Enfield No. 2 in the campaign

Information on the Enfield No. 2 and the Orso

The "Raven Claw" in the Zombies map The Frozen Dawn. The front sight is missing from the third-person model.
Community content is available under CC-BY-SA unless otherwise noted.
Advertisement