The Erad (capitalized as the ERAD in pre-release) is a Mashimo energy submachine gun featured in Call of Duty: Infinite Warfare and Call of Duty: Heroes.

Unlike the multiplayer variant, the Erad is equipped with an underbarrel shotgun by default, which often kills both SDF troopers and C6 units in two shots or less. When combined with the Retractable Shield, the two can be a devastating combo on even higher difficulties.

When all side missions are completed, the Erad unlocks the Splitter upgrade, which converts the primary firing pattern into a slow-firing, vertical spread shot. It also converts the shotgun mode to have the weapon fire in a horizontal pattern.

The underbarrel shotgun appears in the game's multiplayer as the Epic gun perk Master Key.

The Erad is the first submachine gun available, being unlocked by default.

"Beam energy firearm. An exotic design of unknown origin, some speculate it was a prototype for the Steel Dragon."
— In-game description for the Erad - Cyclopean prototype

The Erad can be bought as a wall gun in all maps, and in numerous locations in Zombies in Spaceland for 1250 points. It is available for customization at level 11. Damage is good for the early scenes and can get the player to the late teen scenes. The Erad's magazine appears as 20 rounds as opposed to 30 rounds (presumably for balancing reasons), and is generally a good weapon for dealing with crowds of zombies.

Its greatest weakness is its surprisingly rapid fire rate. Combined with the smaller magazine, it is easy to run out of ammo on a single round without having many kills. Because of this, the Erad should be fired in controlled bursts, and the player should aim for headshots to maximize the ammo given.

The Erad in first person 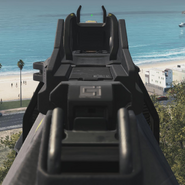 The Cerberus variant in shotgun mode

Aiming with the Cerberus' shotgun mode 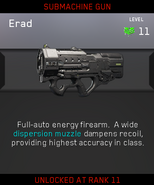 The Erad being unlocked in Zombies

The Erad is used by ETH.3n.