"Experimental energy based handgun that blasts victims into a cloud of mist."
— In-game description.

The Eraser is a energy-based heavy weapon featured in Call of Duty: Infinite Warfare; it is available as a Payload for FTL.

The Eraser can be obtained in the armory room aboard the Icarius in Operation Deep Execute. Once scanned, it can be used as a secondary heavy weapon in the player's loadout. When a C6 dies from this weapon, it will explode to pieces.

Unlike the multiplayer version, the Eraser has a built-in Fusion Mag, allowing it to regenerate ammo when stowed or not in use.

The Eraser is unlocked for use at level 15 for the FTL combat rig. It features an integrated Reflex Sight with a custom cyan Distance Triangle reticle. It has a very small hip spread allowing for high accuracy and a fast fire rate for quickly taking down groups of enemies.

It can be very effective for any range as the weapon has very clear sight, allowing the user to target foes from far distances. The Eraser carries two pertinent downsides, faltering in magazine size and payload charge time, rendering the Eraser a weapon to be utilized sparingly, or in need of assistance for a team advancement.

The Eraser is obtained by activating the Atomic Massacre Fate Card. The weapon works the same way and seems to deal infinite damage. It is a reliable weapon for bosses and later stages of the game, its high fire rate is very effective when taking zombies in close quarters.

The Eraser in first person

The weapon as seen in the campaign's selection menu 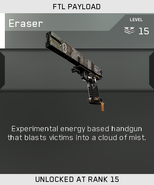 The Eraser being unlocked in multiplayer