For other uses, see Battery and Battery (Cyborg Rising).

Any weapon obtained by the player in Multiplayer.

Unlocked at the Start

"The only daughter and youngest child of five siblings, Erin Baker always had to fight to get her way. Following in a family tradition of over 100 years of military service, and watching her brothers enter the US Army one-by-one, she finally graduated high school and enrolled herself. Driven to excel by her ongoing rivalry with her brothers, she volunteered for Airborne School, before crushing the Ranger Assessment and Selection Program. Heavily armored, she fearlessly operates ahead of the front lines, nimbly traversing urban environments, as she destroys HVTs with salvoes of advanced high-explosive munitions."
— Battery's biography

Much like Ruin, almost nothing is revealed about Battery in her transmissions other that her brother sacrificed his life to save his fellow soldiers and she comes from a long line of military men.

Battery shows a large amount of respect for those who fight well in battle, while she shows disapproval for those who don't. She does seem to respect most specialists and gets along with most, minus Spectre and Nomad.

Some time before 2043, Erin "Battery" Baker took part in a mission in Nile River Coalition territory, but ended up being cornered by the enemy. She eventually managed to handle the situation with the help of Donnie "Ruin" Walsh. The two would go on to become close friends.

In the year 2043, Battery participated in a covert mission with two squadmates, Ruin and Jessica Mason. The mission was a failure, and Jessica was presumed KIA, while Battery was critically injured, losing both of her arms. She was brought in for surgery by Jarrah "Crash" Bazley, under the orders of trillionaire Savannah Mason; as a result, she was enhanced with two cybernetic arms.

Battery continued carrying out her duties, when she received a call from her family, informing her of her brother James, who had died following a mission. After tending to his funeral, Battery received a call from her commanding officer, Haight, who requested her to take part in an unofficial operation to investigate a missing Ranger team in Pará, Brazil. Here, Battery met with a local contact, Alessandra "Outrider" Castillo, who accompanied her on the mission. Upon learning that the Ranger team is still alive, Battery requested a rescue operation, but was denied. However, knowing that Haight intended for her to follow the Ranger's creed, she carried out the rescue despite Outrider's insistence on following orders. The operation was successful, and the Rangers were rescued.

Two years following the botched operation that cost Jessica's life, Battery, Ruin and eight other elite soldiers were recruited by Savannah to join her organization, in preparation for an unknown threat. During a training break, Battery and Ruin discussed their previous mission in 2043, where Ruin questioned their miraculous survival. He then showed Battery a voice message from an anonymous person, warning him to not trust anyone.

Some times later, Ruin was ambushed at his home by mercenaries, but managed to survive thanks to a tip from the anonymous person, who he later discovered to be Jessica. Battery and the other Specialists joined him at Jessica's hiding place, where they learned of Savannah's true intentions.

"Use explosive firepower to rain down hell and clear an enemy stronghold quickly using a combinaison of the War Machine and Cluster Grenades."
— Black Ops 4 Description

+++Decrypt Success
Analytics: NULL
Tags: Brother, Family, School
Header Ends +++
Battery: "So many memories of my oldest brother James from when all five of us were growing up. We were army brats, always on the move from base to base, country to country as dad got reposted. With the stream of new schools, there was the inevitable fights with other kids, and when it wasn't the Bakers vs the world, well, we were fighting amongst ourselves. James was always the protector, the peacekeeper; the voice of reason. He’d keep the bullies at bay and stop things when we got out of control. Mom and dad had put him in charge of enough times that whenever "that tone" crept into his voice, we all pretty much froze and snapped to attention. I was only eight when James went into the army. Without his influence around the place, we all basically ran wild. I think my folks were relieved when, one by one, we all followed him into the service."

+++Decrypt Success
Analytics: KIA, Civ Escort
Tags: Father, Hostile Ambush, Sacrifice
Header Ends +++
Battery: "When I heard my mom’s voice in the phone, I immediately knew something was wrong. James was KIA. They’d only found out this morning. I was to come home ASAP. Before I could say anything, she’d hung up. I had to get home. I informed my CO and packed my bags, trying my best not to let the shock of it knock me down. Dad met me off the transport, and while he drove us home, he told me what had happened. James’s unit was running escort, moving civs out of a hot zone when they were engaged by a hostile rocket crew, He’d circled around using terrain to flank and engage the enemy with a set of Grav Spikes. The spikes blew the crew’s ammo dump sky high, and James, along with it. Ever the protector, he gave his life ensuring everyone else got to keep theirs."

+++Decrypt Success
Analytics: Arlington, Winslow Accord
Tags: Loss, Loyalty, Tradition
Header Ends +++
Battery: "It was a bright, clear morning when we gathered at Arlington for the funeral. Three generations turned out in their dress uniforms. I was so lost in my own thoughts I hardly heard the rifle volley ring out. The last time I attended a service here, I was a little girl, and taps was playing for my uncle. I watched my father’s face as the honor guard folded the Winslow Accord colors before presenting the tightly packed triangle to him. Sure, there were tears in his eyes as he accepted the flag; the token final exchange of child for cloth. But there was fierce pride, too, as he returned the OIC salute. He had instilled the military traditions of honor, loyalty, and courage in us, and James hadn’t wavered from his duty to the last."

+++Decrypt Success
Analytics: Combat
Tags: Grief, Memories, Honor, Service
Header Ends +++
Battery: "All of us stuck around for a week or so after James’s funeral. Grieving, relaxing, telling stories about the good times we had growing up, feigning embarrassment as the inevitable photos from school and family vacations got handed around. Mostly, though, we were just there for each other, there for mom and dad, crying with them when things got too much, laughing with them when we were all reminded of some ridiculous drama that James had gotten us out of. Soon enough, the time came for us to part company and return to our separate units. I’ve been back for a day, now. I want to get guns up as soon as I can. James died fighting for what he believed in, for what we all believe in. And the best way I can honor him is to get out there and be the protector he can no longer be. I love you, bro. I'm gonna miss you."

+++Decrypt Success
Analytics: NULL
Tags: NULL
Header Ends +++
??: (clearing throat) "Based on the requirements layed out at the start of this procurement process, I'm certain that the intelligence gathered in the dossiers in front of you will lead you to conclude that the eight referenced individuals will be the best subjects for your program. Further, I believe that the plant you specified be placed amongst them will independently verify my findings. As instructed, the intelligence was gathered covertly, using a number of measures-"
?? 2: "Are you certain they were unaware of your surveillance?"
??: "Yes, sir, I stake my reputation."
?? 2: "There's more at stake here than your reputation."
??: "Sir, yes sir."

"Let's blow shit up!"
— In response to unknown line.

"I got your back out there."
— In response to Ruin's "Tip of the Spear" line.

"*whistles* Quite the collection of upgrades."
— In response to Prophet's "Future of Combat" line.

"No, it will be the unrelenting hail of our whoop-ass."
— In response to Prophet's "Enemy's Downfall" line.

"Testosterone much?"
— In response to Spectre's "Stay Out of My Way" line.

"Just business as usual."
— In response to Seraph's "Not Personal" line.

"I didn't sign up for this; get your shit together."
— When defeated in a match.

"Mobile artillery gettin' the wind!"
— When victorious in a match.

"What? It's over? Already?"
— When victorious in a match.

"Damn, that's some cold ass shit."
— In response to any other specialist's rapid kills with their specialist weapon.

"Clean up on aisle three!"
— Randomly after multiple friendly kills.

"Kaaaaboooom!"
— Randomly after earning two kills with the War Machine.

"Shoutout."
— Randomly after killing any enemy.

"Took out their Overwatch."
— Randomly after killing an enemy Outrider.

"SEMTEX, I'M STUCK!"
— When stuck by a Semtex Grenade.

"What, there was opposition?"
— Battery's "Opposition" taunt.

"Looks like your asses could stand another kicking!"
— Battery's "Still Standing?" taunt.

"The only way you win is by not playing."
— Battery's "Hero" taunt.

"At least you fought like you got a pair."
— Battery's "Respect" taunt. 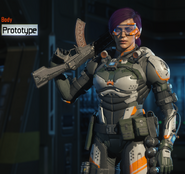 Promotional Artwork of Battery in Call of Duty: Black Ops 4. 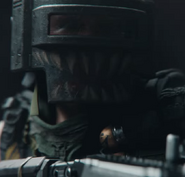 Pre-release version of Battery in Call of Duty: Black Ops 4.

Battery waking up from a nightmare in Specialist HQ.

Battery in a nightmare in her Specialist HQ cinematic.