In Multiplayer, battle it out in "Hotel", on the roof of a Cuban luxury hotel and casino against the vivid backdrop of old Havana; "Convoy" delivers intense, close-quarters combat at the scene of an ambushed US military convoy; "Zoo" takes you on a wild ride in an abandoned Soviet Russian Zoo, with danger at every turn; "Stockpile" pits players in a remote Russian farm town housing secret WMD facilities.

For Zombies fans, "Escalation" features a unique Zombies experience: “Call of the Dead”. Play as the zombie-killing dream-team of Sarah Michelle Gellar, Robert Englund, Michael Rooker, and Danny Trejo against a new and unnerving zombie menace. Set in a mysterious ice-covered remote Siberian island and inspired by legendary writer and director George A. Romero, a group of four fearless explorers fight for their lives amidst an army of bloodthirsty Russian zombies.

"Best dry-aged meat this side of the Ukraine. Aromas that will tantalize the senses"
— Zoo menu description

Zoo is medium-large urban set terrain. The map is set in an abandoned Soviet zoo, with a large monorail that runs through the map. It has several vacant animal exhibits and cages, empty souvenir shops are given jungle-house like skins like in amusement parks and several dry fountains.

The map was inspired by Cold War fears of Soviet invasion. Part of the road on this map has collapsed, allowing players to travel underground.

Hotel takes place in Cuba and is based around a resort, including a pool, a casino, and Elevators. The elevator is a new utility for multiplayer maps that aids the team to hold both the second and first floors.

The map takes place in a suburban village in Russia that includes a stockpile of arms inside one of the buildings. Stockpile also features a building with two large steel doors that can be opened and closed with switches located next to them on both the inside and outside of the building. When using the switch, a siren sounds and alerts the building's occupants.

"A shipwrecked crew of fearless explorers is hopelessly stranded in an abandoned Siberian outpost. Their dream of discovering the true origins of the Element 115 unravels into a hellish nightmare."
— Call of the Dead level description

Call of the Dead is one of the largest Zombies map, with multiple areas. Players spawn on the shore with up to three other teammates, as soon as the players spawn George Romero spawns out of a lighting bolt in a nearby pool. It features a new perk, Deadshot Daiquiri which causes the aim-assist when entering ADS to auto-focus on the head as well as having the effects of Steady Aim and its pro version. Also, when using a sniper rifle, there is no idle sway. Two new Wonder Weapons are introduced, the V-R11, which has the ability to transform Zombies back into humans, and causes them to run away in fear and attract other zombies. The other new Wonder Weapon, the Scavenger, is a bolt-action sniper rifle that shoots explosive bolts with extremely high damage.

"Hamburgers" restaurant menu from "Taste of Escalation" featuring all the maps. 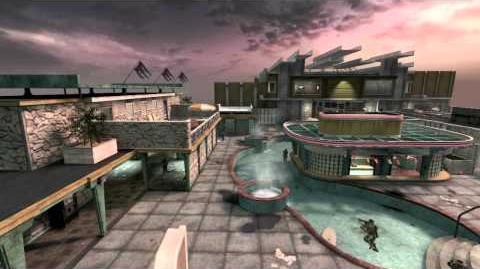