"Cabin in the woods. Fight for control of the cabin."
— In-game description

Estate is a medium-sized multiplayer map in Call of Duty: Modern Warfare 2.

Estate is influenced by "Loose Ends" and Estate Takedown from Campaign and Special Ops, respectively. The house, set atop a hill, is a very influential point during games, as it offers views over most of the map, as well as containing several objectives.

At the bottom of the hill, there are several other buildings, often only used in Domination or Headquarters Pro games as players tend to gravitate towards the house and surrounding high ground. One of these buildings has a roof which can be accessed, as well as the top of the power lines at the far corner. The roof of the boathouse can be accessed as well, which is often used to defend the B objective in Search & Destroy/Demolition. 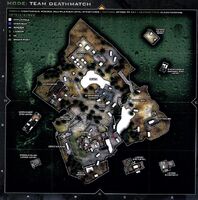 The Estate map with call-out names.
Add a photo to this gallery

Retrieved from "https://callofduty.fandom.com/wiki/Estate?oldid=2562034"
Community content is available under CC-BY-SA unless otherwise noted.