Ethereal Razor is a Perk featured in Call of Duty: Black Ops 4 Zombies. It was added as part of Operation Grand Heist on February 19th, 2019.

Ethereal Razor, when purchased, will make it so offhand melee swipes affect multiple enemies in an arc, offhand swipe and lunge get bonus damage, and offhand swipes and lunges restore a small amount of health.

When Bandolier Bandit is selected as the "Modifier" perk and the player has all of their other perks, offhand lunge attacks will instantly kill basic zombies, as well as do greater bonus damage to others. 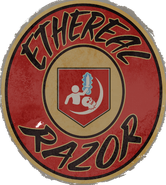 Ethereal Razor statue in use.
Community content is available under CC-BY-SA unless otherwise noted.
Advertisement