Chernov: "This is not war! This is murder!"
Reznov: "This is how you end a war, Chernov!"
— Viktor Reznov addressing Chernov on the bombardment of Berlin.

"Eviction" is the tenth mission in the Call of Duty: World at War campaign. The player plays as Pvt. Dimitri Petrenko of the Red Army. He fights alongside Viktor Reznov and his comrades.

The Red Army has now advanced to Berlin and now attempts to gain control of the city. In the beginning, inside an abandoned building Reznov will ask the player if they are ready to fight. When the player reaches the next room, a German will be executed by a Russian, but the player can shoot the German dead on the spot. After this, the player moves on through into the next room in which a German is desperately trying to call for help on a radio.

They'll then notice the player and his squad, and a firefight ensues, where all of the Germans in the room are killed. In the next room, a Russian can be killed if the player doesn't shoot the executing German in time.

Russian: "Killing me will not save you, my comrades will show no mercy."

German: "Your comrades are not here."

If the player successfully intervenes he will pick up a PPSh once the player and his squad advance and kill the Germans inside. Sgt Reznov's squad fights through this building and enters the street. There, the player is told to kill all Germans in the streets, although the tanks will take care of most of them. The army continues the fight through the street to a metro entrance. Reznov tells the player to kill all the wounded Germans on the street, but they can be simply ignored. When Reznov's squad reaches the metro, three Germans attempt to surrender.

The player has a choice to kill them mercifully or not.

This decision is required for Chernov to say the "good" or "neutral" quote when "Downfall" begins.
Petrenko shoots (not necessarily at the Germans), causing allies to start shooting the Germans. Reznov compliments Petrenko for his mercy.

The Soviets then use Katyusha rocket artillery to crush the defending Germans and start making the area a danger zone, thus, the squad enters the metro as a last resort. The metro's lights are off, and Reznov tells the player to stay in the metro and wait for the lights to pop on. Reznov attempts to open a locked door after clearing out lots of Germans in the metro, while the player keeps the Germans off. All of a sudden, a loud screeching noise is heard and the subway is flooded by the Germans in a desperate attempt to kill the Russians. The level ends with the player submerged in water. 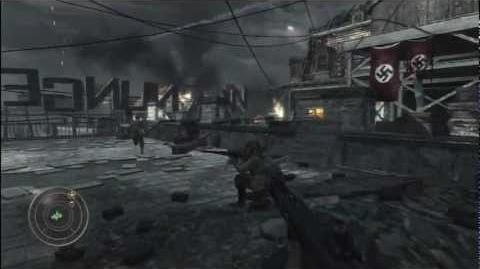 Fighting on the streets of Berlin.

A Soviet soldier aims a Panzerschreck.

A German soldier fires his MP40 during house-to-house fighting.

Fighting in the streets. 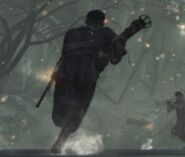 A German soldier runs with a Panzerschreck.

A German soldier is executed.

Fighting in the streets.

) - Kill 10 enemies while the lights are out in the Berlin U-Bahn in Eviction. (Solo or co-op)

) - Complete Eviction on Veteran. (Solo only)