The Executioner (referred to as Raging Judge in early stages and game files) is a double-action revolver featured in Call of Duty: Black Ops II. It is unique in the sense that it fires 28 gauge shotgun shells as opposed to regular handgun rounds. This gives the Executioner much more collective damage than other handguns at close range but inherently much less range.

The Executioner can be unlocked in the customized loadout menu after the player completes five challenges in "Celerium". It also appears as Raul Menendez' signature handgun in the campaign. At the start of "Achilles' Veil", Menendez uses his Executioner to fire at some Quadrotors while making his way to the Citadel.

The Executioner is the fourth handgun, unlocked at level 31.

The Executioner has no headshot multiplier to speak of. A headshot will do the same amount of damage as a shot to any other part of the body. The Executioner, like the other pistols, has very low penetration power, meaning that the Executioner is only capable of piercing through the thinnest of cover.

The Exeuctioner, in close quarters combat, has incredible per shot power, but this range is very short. Once the Executioner starts doing fifteen damage per pellet, its lethality is heavily diminished. Not being able to do any damage beyond 12.5 meters is also very restrictive, as it prohibits the Executioner from being used in medium range combat. The Executioner is intended to be used in CQC only.

The Executioner reloads shell-by-shell, as it is a revolver and not a pistol. The opening of the cylinder and inserting the first shell takes 1.7 seconds, and all subsequent shells inserted take 0.6 seconds. Once the Executioner has been fully loaded, an additional 0.85 seconds is needed for the user to close the clylinder. The user can perform a reload cancel at any point during the reload, and can completely skip the animation of closing the cylinder. A full reload of the Executioner takes 4.95 seconds if no reload cancel is performed. The Executioner can take a very long time to reload, painfully so for a weapon with such a limited capacity. Because of this, Fast Mag is a very alluring attachment choice.

The Executioner has by far the lowest capacity of any of the handguns in Black Ops 2, holding only five rounds before needing to reload. Due to the Executioner's semi-automatic nature and the lacking damage per pellet it deals at the extent of its effective range, said five rounds can quickly evaporate. Up close, ammo can be conserved, seeing how the Executioner has very realistic one shot kill potential in CQC. Because of the low capacity, the Executioner user gets a measly twenty shots total at their disposal when spawning in. If using the Executioner in a primary weapon role, this may not be enough.

Fast Mag replaces the shell by shell reload of the Executioner and replaces it with a single action reload. It functions identially to the Speed Reloader for the Python from Call of Duty: Black Ops, reloading all five shots in one motion instead of a shell by shell sequence. The Fast Mag reload will take 2.55 seconds, or 1.7 seconds with a proper reload cancel. A reload cancel with Fast Mag is on par with reloading just one shell normally, meaning that the Executioner's reloads are almost always improved regardless of how many shots are left in the chamber. This improvement is well worth investing in. A very popular attachment combination is to equip the Secondary Gunfighter wildcard and pairing this attachment with the Long Barrel. The two attachments in tandem go a long way to improving the Executioner overall.

The Tactical Knife increases the swing speed of the Knife, allowing for faster follow up attacks with the knife. The Executioner can run out of ammo very quickly, and as such, the Tactical Knife can come in useful as a desperation move when the Executioner is dry and the player is in trouble. Overall, though, there are better attachments to use than this.

Dual Wield gives a second Executioner to use. Like with the Python in Call of Duty: Black Ops, using Dual Wield automatically gives the effects of Fast Mag, except it's even better, as a reload cancel can be perfomed in just 1.3 seconds instead of 1.7 seconds. Using Dual Wield increases the size of the hip-fire spread to a size on par with the pellet spread shotguns, making the Executioners much less precise overall. Dual Wield also slows down the switch speeds of the Executioner, making them less reactive as a secondary weapon. Dual Wield also prohibits the ability to use other attachments in tandem with it, most notably Long Barrel. Dual Wield Executioners give a lot of firepower up close, but make the Executioners even more unwieldly at the edge of the weapons' effective range. Dual Wield is an alluring attachment, especially considering that it speeds up the reload, but the downsides it brings and its incompatability with the Long Barrel make its value quesionable.

The Executioner is the third weapon tier on Gun Game, where it is equipped with the Laser Sight attachment.

The Executioner has since been buffed as of January 26, 2013's Title Update by having its damage at medium range increased from 10 to 15. It will now rarely take more than four shots to kill within short to medium range, making it a much more effective weapon overall.

"The Executioner...a five-chambered portable shotgun-pistol. Really? I should execute you, you cuboid of chaos, for giving me this unwieldy thing!"
— Marlton Johnson, when obtaining the Executioner from the Mystery Box.

The Executioner is available from the Mystery Box for 950 points on all of the maps except Origins. It has high damage by default, being able to kill zombies in one shot approximately up to round 15, depending on range and how many pellets hit. The raise and drop times are also very fast as it is a handgun, making a trusty sidearm for close range situations. However, the weapon's main downside is its somewhat low cylinder capacity of five rounds and a lengthy reload, as well as lack of range; while arguably one of the best close range weapon from the Mystery Box, the weapon has quite low damage at distance due to its shotgun nature. Speed Cola greatly speeds up the reload, which can be a life-saver at tricky situations. Reload cancelling can also shorten the reload time by a few hundred milliseconds. Double Tap Root Beer is a great help, further augmenting the Executioner's already exceptional damage by doubling the amount of pellets shot. Compared to the Python, the Executioner is far more powerful at best, but suffers from a slightly lower cylinder capacity and much less range.

When Pack-a-Punched via the Pack-a-Punch Machine, it becomes the Voice of Justice. It gets more reserve ammo, range and damage, with the potential to get one-shot kills up to round 35 from close range, making it a worthwhile weapon choice in Zombies. It is one of the weapons that can be Pack-a-Punched multiple times to cycle through various attachments for 2000 points. The attachments which are available are the Long Barrel and FMJ.

In the Zombies Game mode Turned, the Executioner is the first weapon to be used when the player is human.

Executioner vs Voice of Justice 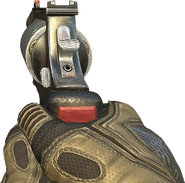 The Executioner in first person 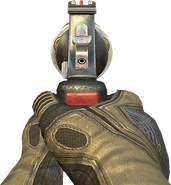 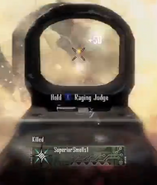 Pick-up icon; note how the early name was Raging Judge