SUMMARY PROFILE: The specifics behind the roots of General Dragovich's hatred for the West are unknown, but as the extent of his plans have become evident, it is clear that this hatred borders on pathalogical.

Climbing through the ranks of the KGB, Dragovich ultimately became one of the most powerful men in the Soviet Union, with its entire military seemingly at his disposal. For such a high-ranking officer and influential member of the Communist Party, little is known of the general's background despite numerous attempts on the parts of Moscow-based Agency assets to acquire information on Dragovich's personal history. The inability to acquire intelligence on the man indicates a deliberate attempt at secrecy.

Holding grievance dating back to the Siege of Stalingrad, Dragovich has nothing but contempt for "The Wolf" Viktor Reznov, a man who Dragovich believed to be a threat to his plans for power.

FROM: Ryan Jackson, (Chief Analyst, APLAA), in conjunction with OSA/DI

SUBJECT: Recommendation based on the aftermath of Operation Zapata and the recent detonation of the 57Mt Soviet AN602 Hydrogen Bomb.

SUMMARY PROFILE: Born in Russia, Grogori and his mother defected to the US during WW2 after his father Gedeon, a local political figure, was executed during Stalin's Great Purge just before the outbreak of the war.

Despite an initial degree of mistrust from his American colleagues, Grogori has proven his worth as a deep cover agent behind the Iron Curtain on many occasions. He is a skilled engineer, and area of interest that he acquired from his tinkering father. 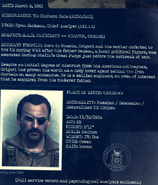 Complete Intel document.
Add a photo to this gallery

Intel No. 3
Add a photo to this gallery
Retrieved from "https://callofduty.fandom.com/wiki/Executive_Order/Intel?oldid=2441993"
Community content is available under CC-BY-SA unless otherwise noted.