For the Call of Duty: Warzone gamemode, see Exfiltration.

Exfil (short for Exfiltration) is a Utility featured in Zombies, introduced in Call of Duty: Black Ops Cold War (first appearing in Die Maschine) and present in Call of Duty: Vanguard. It allows the player to, as the name suggests, exfil to safety and end the match without either quitting the game or dying.

On Die Maschine, Firebase Z, Mauer der Toten and Forsaken, Exfil only becomes available on Round 10. However, on Outbreak, the option to Exfil is available immediately after completing an objective if the player so desires. To begin an Exfil, the player must hold their respective interact button near the Exfil radio. On solo the Exfil will immediately begin, but on Cco-op the other players must vote to agree to Exfil. The player will then have 1 minute and 29 seconds to run to a certain location on the map where Raptor One (Lev Kravchenko on Mauer der Toten) will pick them up. The player must then kill all enemies in the area to "clear some space" in a limited amount of time. If the player succeeds, they can interact with the helicopter and exfiltrate to safety. If the player fails, Raptor One's helicopter will be targeted by Omega Group and shot down (in Mauer der Toten, Kravchenko's helicopter will be shot down by an energy blast from Aleksandra Valentina).

In Der Anfang and Terra Maledicta, Exfil becomes available once the player reaches Round 5. To begin an Exfil, the player must hold their respective interact button at the Runegate. On solo the Exfil will immediately begin, but on co-op the other players must vote to agree to Exfil. The player will then have to kill a certain amount of enemies before they escape. Once the required number of enemies are killed, a timer will begin and the player must head to the Exfil portal and hold their respective interact button again, which will clear the map of all enemies and lower the player's weapon, ending the match shortly after.

The Runegate in Der Anfang, inactive. 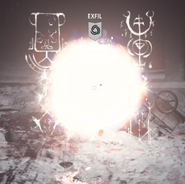 The portal used to Exfil in Der Anfang.
Community content is available under CC-BY-SA unless otherwise noted.
Advertisement