"A new breed of zombies."
— Teaser

Exo Zombies is a game mode in Call of Duty: Advanced Warfare, developed by Raven Software in partnership with Sledgehammer Games. It is canon in its own universe separate from the plot of Call of Duty: Infinite Warfare Zombies and Treyarch's version.

It first appeared on the map Riot in Exo Survival as a bonus round, but not as an actual standalone game mode. In the pre-rendered cutscene, the surviving player character escapes, and jumps aboard a Warbird. Gideon, who is present on the Warbird, checks on the survivor, but gets attacked by an Exo Zombie and is presumably killed.

The game initially stars four playable characters: Oz, Lilith Swann, Jim Decker, and Kahn. A new character, Lennox, appears as a supporting character in the map Infection, and replaces Oz in both Carrier and Descent.

Exo Zombies is similar in style to the traditional Zombies mode. The game is based on rounds, with difficulty increasing per round. Players earn credits by killing zombies, activating Power and ATMs, and reviving other players. Weapons can be purchased from wall mounted 3D Printers around the map (the equivalent of chalk weapon outlines), which feature a holographic image of a weapon. The weapon is printed on the spot when purchased. In addition, there is a random 3D Printer that features changing weapon holograms (the equivalent to the Mystery Box). Doors and traps can be activated using credits. Exo Upgrades take the place of Perk-a-Colas, providing the players with perk-like abilities. Enemies also drop power-ups similar to those in the original Zombies. Zombie Dogs are introduced, taking a similar role to Hellhounds.

The game mode has some changes from the original Zombies mode. Zombies deal lower damage, so players can take more hits before going down. Players can shoot the legs off of zombies, instead of only having to use grenades. There are also no barriers on Zombie entrances. Exo Suits are also present for both players and zombies. They provide the players with more freedom in movement, as well as more dangerous zombies. Exo Zombies has more freedom in movement, and allows for mantling and jumping to higher ledges. Orbital Care Packages are also dropped on occasion, offering scorestreaks such as the Remote Turret or bonus credits. Exo Zombies does not feature a Pack-a-Punch Machine, but rather an Upgrade Station. For 2,500 credits, the player can upgrade their current weapon to a higher level, up to level 20 (completing the map's easter egg allows one more upgrade to level 25). Upgraded weapons become slightly more powerful each level, gain a new camouflage each level and sometimes gain attachments. The level the weapon is can be seen in the weapon name. Players can also be infected with the zombie virus if they are attacked by Host zombies. They have 60 seconds to reach a decontamination unit or they will become a zombie in co-op or downed when playing alone, with every additional hit from a Host speeds up the countdown in the meantime. At 0, the player essentially dies and becomes a spectator, but their character becomes a zombie in co-op and will act as a regular enemy, chasing down the remaining players. When playing alone, the player will be downed if Exo Medic is active or simply dies, ending the game.

Players begin with an Atlas 45 and four Frag Grenades. The Exo Suit is not available right away, and the melee attack uses the standard knife. Exo Suits must be found, which allows for Exo Boosts, a more powerful melee (one hit kill up to round 5), and the ability to purchase Exo Upgrades.

"Atlas's new pet broke out of the lab and infested an entire compound. Fight with up to 4 players to survive against endless waves of mutant zombies!"
— Outbreak In-game Description

Outbreak is the first (chronologically the second) Exo Zombies map featured in Call of Duty: Advanced Warfare. This map takes place in an Atlas facility that has been overrun by zombies. In Outbreak, the player first starts out with no exo suit, an Atlas 45, and four frag grenades. They must open doors to get to the Exo Testing Room to obtain Exo Suits. Most areas of the map have a power switch that needs to be activated in order to turn on the Exo Upgrade stations, which are similar to Perk-a-Colas from Treyarch's Zombie mode. The randomized 3D Printer has five locations, but only one is active at a time. There are two Upgrade Stations that allow weapons to be upgraded up to mark 20 (25 after completing the easter egg). There is also a Decontamination Zone, which will cure players that have been infected. The starting area features a Bulldog and MK14 printer for 500 credits each, similar to the starting weapons in Call of Duty: Black Ops and Call of Duty: Black Ops II.

"The infection has spread to rural America, and everyone's favorite burger joint! Fight with up to 4 players to survive against endless waves of mutant zombies!"
— Infection In-game Description

Infection is the second (chronologically the third) Exo Zombies map featured in Call of Duty: Advanced Warfare. This map takes place in a Burger Town restaurant now turned into an Atlas Command Center with other businesses acting as supply rooms. New features include an objective round where players have to rescue civilians and lead them to extraction, toxic zones that can contaminate players during certain rounds, and new zombie types such as the Goliath Exo Zombie.

"The source of the contagion has infected Atlas's prized super-carrier! Fight with up to 4 players to survive against the endless waves of mutant zombies!"
— Level description

Carrier is the third (chronologically the fourth) Exo Zombies map featured in Call of Duty: Advanced Warfare. It is set at an Atlas aircraft carrier somewhere off the coast. This is the first Exo Zombies map that features dual spawn points, similar to Verrückt. It is also the first (chronologically the second) Exo Zombies map in which the players can survive. Two new utilities (both of which are key to the main easter egg), the Grenade Disposal Machine and the Weapon Disposal Machine along with a new Exo Upgrade, Exo Stockpile are introduced. Since Oz was killed, he was replaced by Lennox. Three new types of enemies are introduced, Teleporting Zombies, a reworked Goliath Exo Zombie, and Atlas Strike Teams. Objective rounds now feature Gas Bombs that have to be defused, otherwise the area will be filled with toxic gas.

"The hunt for Oz leads to a climatic showdown in Atlas's underwater city. Fight with up to 4 players to survive against endless waves of mutant zombies!"
— Level description

Descent is the fourth (chronologically the fifth) Exo Zombies map featured in Call of Duty: Advanced Warfare. It is set in an Atlas Corporation underwater facility, known as The Trident Retreat. Lennox, Lilith Swann, Jim Decker and Kahn return as playable characters, with Oz being briefly playable during a segment of the map. Oz is also featured as an enemy, and a new weapon, the KL03-Trident is introduced in the map.

Following a failed attempt to contain a riot at a prison in New Baghdad, Atlas releases the Manticore bioweapon in order to quell the uprising. However, instead of killing the rioters, the Manticore bomb reanimates them as zombies. Three platoons are sent in to cage the undead forces, but only one survives, and the others are brought back to an Atlas research facility for further studies. The research is carried out in secret, without the knowledge of the employees, in a hidden area known as Sublevel 6. One night, the captured zombies break out of their containment and overrun the facility. Amidst the chaos, four Atlas employees - the janitor Oz (John Malkovich), the IT specialist Lilith (Rose McGowan), the security guard Decker (Jon Bernthal), and the executive Kahn (Bill Paxton) - attempt to evacuate, but both of their rescue helicopters are destroyed. The four survivors mount a last stand against the zombie horde, but are eventually overwhelmed. However, they are rescued by Atlas forces, who then take them to an urban facility, for medical treatment. When the four survivors recover, they are thrown into another battle against the infected, ensuring the survival of not only themselves but also innocent citizens trapped in the vicinity.

Eventually, the group is rescued by Sentinel Task Force operatives, but their leader, Captain Lennox (Bruce Campbell), claims that Oz is the source of the zombie infection. Lennox executes Oz and has Lilith, Decker and Kahn injected with anesthetic. However, Atlas forces ambush them and reclaim the ex-Atlas employees. Sentinel tracks them down, leading them to an Atlas aircraft carrier in the middle of the ocean. Oz, however, begins to reanimate while being transported on one of the Sentinel's transports. Upon arrival within the carrier, Lennox locates the three Atlas survivors and leads them in battle against the combined forces of the zombies and Atlas soldiers. Lennox reveals to the other three that Oz was once part of Sentinel, and that he was present at the prison when Atlas released the Manticore bomb, making him one of the very first victims of the infection. He also claims that Oz was planted in Kahn's facility by Atlas in order to start the zombie outbreak. The group decides to sink the carrier to the bottom of the ocean, in order to prevent the infection from spreading. They set the ship to self-destruct, but before they can extract in an emergency pod, they briefly encounter Oz, now fully zombified while retaining his intelligence.

The group escapes and decides that Oz must be eliminated, and head to a nearby Atlas underwater survival facility, the Trident Retreat. Oz, however, has already arrived at the facility and murdered all Atlas employees within the base. The group bands together for one final battle against the undead horde, including Oz himself. After undertaking various challenges set by Oz, they are teleported into a digital representation of Oz's memory, where Kahn, Lilith and Decker learn the truth: while they are immune to the Manticore virus' effect, they can be used as a cure for the infection, unlike Oz. Having finished all of Oz's challenges, the group finally confronts him and discovers he has mutated into a monstrous figure. After a long fight, Oz is finally killed, and the group proceeds to burn his mutated corpse, vowing vengeance against Atlas. In the aftermath of the incident, Lennox is promoted to Lieutenant Colonel, and he helps Decker enlist in Sentinel as a full-fledged soldier; Kahn files a lawsuit against Atlas, with the help of Lilith, who now works as a hacktivist. Unbeknownst to the group, Atlas has already created clones of Oz, all kept hidden under the Trident facility.

Exo Upgrades function very similarly to Perk-a-Colas from Treyarch's Zombies mode. One significant difference is that their functionality is tied directly to the power of the Exo Suit, regardless of the player already having purchased the "perk" (excluding Exo Medic when used on solo).

A group of exo zombies in Outbreak.

A Charger zombie in the foreground being followed by an EMZ zombie, and then an Exo-Zombie to the far right.

A group of zombies in Infection.

A zombie on Carrier. 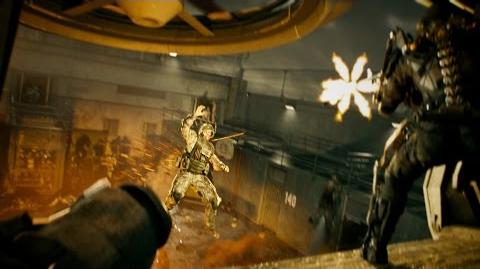 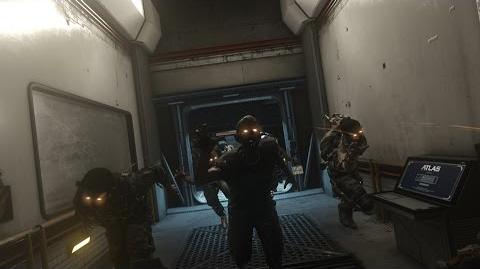 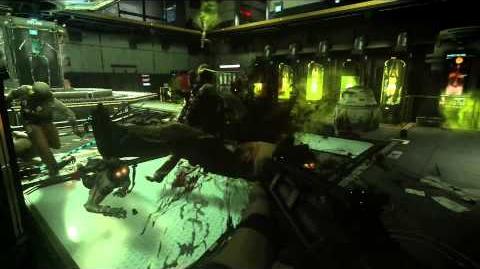 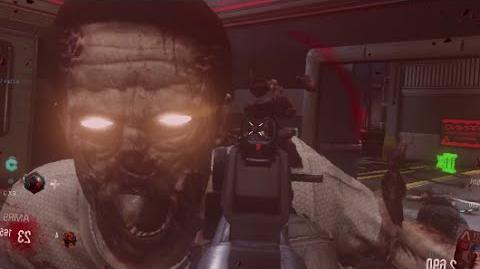 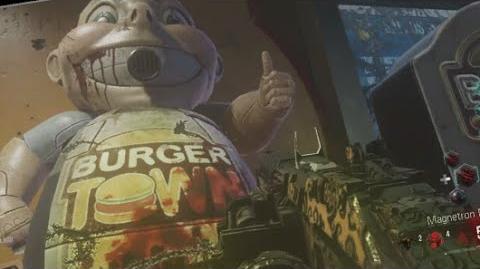 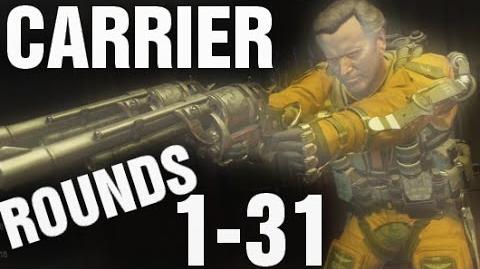