The Beast from Beyond (chronologically)

Power up all six generators.
Kill the Cryptids and Ancestors to power up the Cortex, which will activate the Medusa Device.

Elements of Struck Down

"History repeats itself, one species falls, another rises to take its place."
— Samantha Cross from the trailer.

"Defend the Exodus base until the spacecraft can be launched."
— Mission Description

Exodus is the fifth and final Extinction map of Call of Duty: Ghosts. It is featured in the Nemesis DLC. Many new features are introduced, like the mission itself being more non-linear and new weapons like the NX-1 Disruptor.

Following their escape in the last episode, and the successful recovery of Dr. Cross and the cortex, the CIF Unit has flown in to help fight off the Cryptids laying siege to the last bastion of human resistance. As one of the last hopes for mankind, the Unit mission is to get key personnel to safety by restoring power to the shuttle and launch it to the safety of a low earth orbit space station.

Nearly every Crypid from all the previous episodes are featured in Exodus, including a new and dangerous enemy, the Ancestor. Although they were seen in Awakening, now the Ancestors have come to the surface to fend off the last remaining humans. They have the power of mind control and telekinesis.

Exodus allows players to choose their own path, and play their own way. They also need to activate generators on the map. After activating all six they must kill Cryptids and Ancestors to power the Cortex and activate the Medusa Device.

This is where the players first start out, and is also used as the location in Chaos Mode. This area will not initially be attacked by Cryptids, however once the player opens a gate they will start attacking the player and will be able to attack the player if they enter the outpost area. This area has multiple aids for the players, like the VKS and the Tesla Anti-Air Defense System. Also, it has the schematics for the NX-1 Grenades and the Hypno Trap. Other available traps include a mounted Minigun turret and some remote turrets.

There is also usually many Search Piles in the outpost, and there are usually enough with parts for schematics for a player to build at least one, if not two, schematic items.

Outside of Car Garage Area 1

This is outside of the black gate at the front of the area when spawning, which is also outside of a car garage. It does not contain any weapons, and is connected only to the car garage with an opening.

The area contains many Search Piles usually, and a piece of Intel.

Like the first outside area of the car garage, it has a lot of Search Piles.

After all six generators and all the doors have been opened, the players must meet back at the outpost. Cross communicates on the radio that she has the cortex and is entering the area. Godfather questions her motives, while "Archer" taunts in the radio that she is "playing make-believe." Once all the players meet, Cross, who is levitating and controlling several scouts, kills them and lands on her feet. She inserts the cortex in to the Medusa device, while explaining that CIF Team 1 must stay here and defend the weapon until it is fully charged. Godfather commends her choosing to side with the humans after all this time, then she proceeds to teleport to the rocket.

All players must then hold the use button on the Medusa device to activate it and take on the final stand against the Cryptids. Three Ancestors will appear in random order at the front gate, the right gate, and the left gate, each with a challenge to complete which will give players additional skill points to spend on upgrading their abilities. When the Ancestor on the left gate appears, it will attack a generator, which will disable all of the traps and turrets until it is repaired. Once all 3 Ancestors are defeated and the cortex is completely charged, all players must gather and detonate the Medusa device to complete the mission. If the players stall in detonating the cortex, 3 Ancestors will appear at once, so once it is fully charged, detonate it as soon as possible.

Story (Based on Intel)

CIF Team 1 are on-route to the Exodus launch site when they are contacted by Godfather, who tells the pilot of Arclight that they don't know if Cross can be trusted and that their orders are to protect the Cortex by any means necessary. On board, Dr. Samantha Cross sits bolt upright in her seat and begins to shake. It stops and she looks at the Cortex, kneeling next to it. A soldier quickly comes over and points his pistol at her head, asking her if there is anything she wants to say before he pulls the trigger. She replies, "You might want to fasten your seatbelt." He looks out the windshield, which a Gargoyle is flying towards, its arms outstretched. It bursts through the windshield and smashes the pilot. The soldier fires two shots before it kills him as well. Another soldier begins to fire at the Gargoyle before it launches towards the camera.

Exodus - Godfather explains that when the threat of a doomsday scenario became clear, a contingency plan was enacted to safeguard the future of the human race. The program retrofitted a decommissioned space station for a hand-picked group of elite soldiers and scientists to survive on until their descendants could reclaim the Earth.

Gargoyles - Paleobiologists have a Latin name for the flying Cryptids, while other people call them Gargoyles. They're silent, fast and invisible to radar, being strong enough to rip the tailbone off an Apache gunship. They dominate the skies over the cities and launch facilities. Humanity will never get off the ground if they can't find a way to break through.

Psionic Warfare - The Cortex is the ace up the military's sleeve. It is the preserved brain of a living Ancestor contained in a casing used for transporting donor organs. It absorbs bio-electric energy and stores it like a psychic battery and then detonates like a neutron bomb. Apparently the radiation is harmless to humans. When the pulse is focused and amplified it will fry the brain of Cryptids in less than a second.

Ancestor Combat - Scientists have been studying the data collected in the Ark raid, but they still don't know exactly what they're up against. They possess both telepathic and telekinetic abilities. Their physical bodies are relatively fragile, but they can project a powerful gravimetric field to deflect attacks and levitate. They are impervious to small arms fire while the field is active, but the experimental weaponry developed by Archer may even the odds.

The Final Option - The Colorado Ark was only one of dozens, perhaps hundreds of Ancestor strongholds, the citadels of a prehistoric empire that once spanned the globe and will soon do so again. Humanity lost Washington in the first eight hours. San Antonio, Colorado Springs, every military centre in North America has been annihilated. The President is dead and Godfather is in command of what is left of the US. They are overrun and surrender is not an option. There is only one refuge left beyond the enemies reach.

Caller ID: Unknown - The voice of David Archer sends a transmission to Godfather, informing him that that he knows what he's thinking, but he's wrong. He's got it wrong about a lot of things, like Samantha Cross. Archer informs him that she's a sleeper, a double agent. Everything's that's happened, everything that's about to happen aboard the space station, is all part of the plan. Their plan, not the General's. Around the word "space station" Archer's voice takes one a deeper tone and experiences a slight echo. The analysis of his voice shows it doesn't match the real Archer's and that the transmission was sent three hours ago from multiple sources, and that Godfather has been notified.

More Than Human - Samantha Cross explains that the Ancestors left her for dead once, later saving her life. She informs the player that they're on the same side now, but she's not the same person. Maybe she's not even human any more. She can sense the Ancestor's fear, they're wondering if they should kill her, but it's a bit late for that. Samantha Cross died months ago, on a cold night in Alaska.

The Exodus rocket takes off, someone shouting that they aren't going to make it. As the Gargoyles start to swoop down on the rocket the Medusa device detonates, the blue shockwave knocking all the Gargoyles out of the sky. One of them lands on the camera, causing it to go black. The screen cuts to a shot of the Earth from a distance, the Exodus rocket and space station visible. Much of the Earth is on fire and completely scorched. Samantha Cross narrates that history repeats itself, one species falls, another rises to take its place. The screen goes black again before zooming on a porthole, out of which Cross is looking. She says that countless lives were sacrificed to ensure a chosen few might be saved. She begins to drift back into a chair like the one she was held in on the Stormbreaker. She then states that people believed that her power could make the difference between survival and extinction. They were right, she says as her eyes open, turning from hazel to red.

Always Hard - This is simply a bonus intel that isn't required for the achievement. It shows a gathering of people watching a man fire a flaming arrow at a large, flammable Neversoft logo. The other screens just show various parts of Neversoft's workspace. To obtain this intel the player must shoot the letters on the large gas station sign atop the garage on the left side of the map, spelling out the word 'Neversoft'. The player will know if they have hit a letter if it appears at the top of their screen. After hitting all nine the world will shake and the player character will say 'Intel stowed'.

The location of the facility in Carmel Valley, California.
Add a photo to this gallery 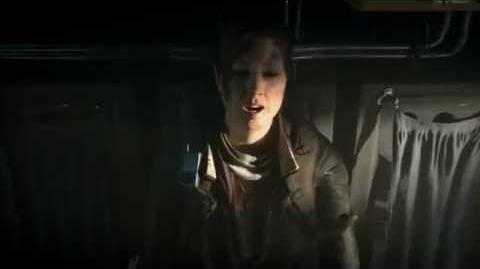 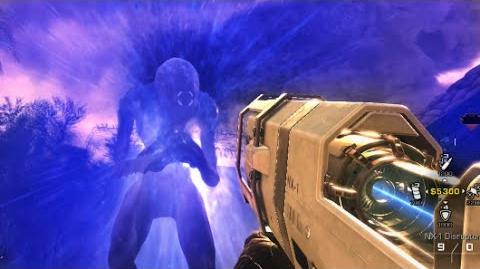 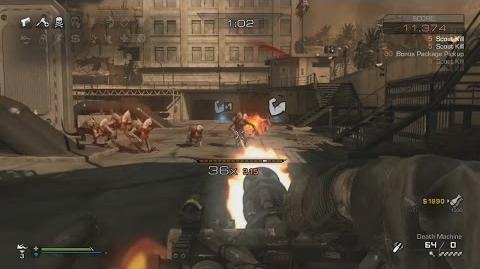 Retrieved from "https://callofduty.fandom.com/wiki/Exodus_(Extinction)?oldid=2508665"
Community content is available under CC-BY-SA unless otherwise noted.