For other uses, see Exodus.

"Exodus" is the eighth mission of Call of Duty: Modern Warfare 2 and Call of Duty: Modern Warfare 2 Campaign Remastered. The player takes control of Pvt. James Ramirez, who must follow Foley and the team to mop up any enemy resistance with the help of a Stryker, "Honey Badger", take out anti-aircraft batteries with the help of "Honey Badger", and get intel from a HVI and evacuate him on 4677 Brookmere Road.

The player controls Private James Ramirez, starting off on foot. The first objective is to destroy enemy anti-aircraft batteries so US forces can evacuate civilians. The player engages Russian troops through a suburb with the help of a Stryker IFV, callsign "Honey Badger." Make sure to lase targets for the Stryker. The first portion of this level is simply to follow a street until the player reaches an enemy-held tollhouse guarded by a sentry gun, which the player should be sure to destroy. Use the Stryker as much as possible, and defend it from any enemies with RPGs that the player finds. Once the player has cleared the tollbooth, the player will enter a neighborhood with heavily occupied houses on either side. Use the Stryker to decrease the number of enemies in the houses before going inside. Always use a close-quarters weapon like the Striker, P90, UMP-45 or the MP5K in the houses, as only close-quarter battle occurs inside. Eventually, Ramirez's team reaches a golf course where they destroy the anti-aircraft batteries with artillery strikes.

With the first objective complete, the Rangers press on to their second objective: secure and evacuate a High Value Individual (HVI). Ramirez's team moves further into the suburb and reaches a house where a C-130 Hercules has just crashed into. The team moves into the house to secure the HVI from a panic room, but find him already dead. The team grabs a briefcase containing unknown documents and prepares to leave. As they leave, Cpl. Dunn notices a unique Russian trooper.

James Ramirez, Foley, Dunn and many other Rangers along with a Stryker named Honey Badger start off by attacking Russian troops from houses on the sides of the roads. Foley informs the squad to stay out of Honey Badger's path. After clearing out some houses on the road, they spot three choppers coming in. They drop troops in the parking and the office of 'Garden Villas Apartment' and start attacking.

The team takes them out with the help of Honey Badger, and they proceed to the entrance toolbooth of Arcadia, coined as Checkpoint Lima by Foley. They engage troops before the open garden, inside the control offices and clear their way to the objective. After crossing a covered bridge, Dunn notices a C-130 Flight crash land somewhere to their front. He mistakenly identifies it as an AC-130. Just then, Overlord sends an order to retrieve an HVI (High Value Individual) from the house where the plane crashed.

After clearing out heavily defended enemy occupied houses on both the sides, they continue to a golf court where Ramirez uses his laser designator and calls an artillery on the anti-aircraft vehicles. After both the batteries are destroyed, the team diverts to 4677 Brookmere Street to reveive the HVI. Foley asks Overlord about what it is that they are trying to extract. Shepherd informs them of the HVI, and then tells them to check back with Overlord when they are done with their objective.

They reach the house, only to see that the HVI is dead. Foley notices that something is wrong and tells Ramirez to check the Panic Room, thus revealing the truth. Ramirez picks up and intel briefcase of the HVI and Dunn informs Shepherd about the incident.

Smoke in the air.

Viktor, dead at the scene of the crime. 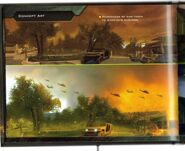 A VDV soldier checking the refrigerator, surprised by the Rangers.