"This toolbox that the Exoskeleton brings to you as the player, redefines how you're going to play Call of Duty."
— Michael Condrey

Featured in the campaign, multiplayer, Exo Survival and Exo Zombies, the Exoskeleton is a wearable mobile machine that is capable of increasing many of the player's physical abilities, allowing for enhanced strength, increased movement and speed, as well as tactical purposes. The Exoskeleton changes gameplay heavily, allowing for a wide variety of options as to how missions are completed, as well as general physical freedom within the game world.

Exoskeletons seems to be universally equipped by the dominant factions, such as Atlas and the USMC. Aside from enhancing the user's abilities such as superhuman strength, capable of single-handedly lifting a full grown man by the neck, to even punching enemies several feet in the air, they are equipped with numerous abilities, allowing for various tactical attacks as well as strategical superiority among other players. Some enemies, referred to as "Boosters", are known to use Exoskeletons in the same way that players can, such as dashing, leaping great distances, and cloaking.

At the time of Advanced Warfare, Atlas is in the midst of developing a next-generation version of the exoskeleton, the XOS-9. This model is shown to be far more physically ergonomic with an overall slimmer model, allowing for even more flexibility in combat.

Exoskeletons can also share information with other devices. For example, pertinent weapon metadata (such as its current ammunition count) can be linked directly to the soldier's exoskeleton, which is then visualised as a holographic projection. This provides a diegetic explanation for the ammunition display in the game's heads-up display.[1]

As an April Fool's joke, when the player used any Exo movements, such as the Boost Jump, Boost Slide, Boost Dodge, or Boost Dash, the player would make a clown horn noise. It was later removed.

Both assault and specialist

In Exo Zombies, the player starts with no Exoskeleton, and must acquire it from the central part of the maps. Obtaining it allows the player to use the exoskeleton movements, and additionally obtain the Exo Upgrades. Players that die will have to recover it again from the Exo Stations. Players must obtain Exo Slam, however, in order to use the slamming ability.

A soldier equipped with an Exosuit during combat.

Gideon scaling a wall with the Mag Gloves.

Back view of the multiplayer Exo Suit, note the 'backpack' unseen in the campaign.

Exoskeletons lined up along a wall. 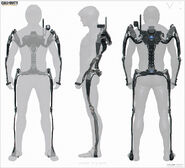 Exoskeletons return in Call of Duty: Black Ops III but are changed. The player character in the campaign is now a cyborg. However, certain multiplayer characters utilise exoskeletons, such as Nomad and Outrider. Instead of simple boost jumping, players can hover in the air for several seconds using their "thrusters" in multiplayer, Free Run and Combat Immersion, as well as campaign if the player has the Traversal Enhancement tactical rig upgraded. Players can also wall run in all modes, allowing players to run along certain flat walls and other surfaces. Players can also run up walls, allowing them to get up to high surfaces when the thrusters are not available (like in the campaign, for example).

Exoskeletons are once again used by some enemies, with certain soldiers, friendly and enemy, clearly possessing an exo-suit harness. A new edition are much more advanced, more powerful exoskeletons that act more as power armour. Utilised by Warlords, these suits massively increase the user's durability, mobility and physical strength; a Warlord's exoskeleton allows them to easily wield and fire their light machine guns with just one hand, something that even Cyber Soldiers cannot do. Warlords' exo-suits allow them to jump up high onto platforms for a tactical advantage and the suit also has a built in repulsor system to defend against explosives. The suit also grants its user some degree of resistance to certain Cyber Cores abilities. Warlord exoskeletons also have a sophisticated helmet with advanced electronic controls and enhanced optics. The exoskeleton is built by the Common Defense Pact and is state-of-the-art - CIA agent Rachel Kane was surprised that some had been sold to the 54 Immortals, as she believed the CDP were only equipping their shock troops with them.

The Manticore is also technically classified as "heavy assault exoskeleton" by the CDP, though its size makes it more akin to an infantry fighting vehicle.

The Cyber Core ability Augmentation Breakdown can be used against exoskeleton soldiers and Warlords, causing their suits to seize up. Terminal Breakdown will kill humans in basic exoskeletons, contorting their limbs in horrific and unnatural ways, while Warlord will not be killed but rather be temporarily stunned as the user fights to control their suit.

An Exoskeleton is essentially a 'wearable robotic harness', that accurately follows and sometimes amplifies it's 'pilots' actions incredibly accurately.

Exoskeletons had been a staple of science fiction for 40 years or more, when the first practical models began to appear in the first quarter of the 21st century.

Initial variants were split between civilian use cases and military roles:

Once the basic of the technology were well understood, development of prototypes and basic production models happened swiftly, however it wasn't until breakthroughs in graphene based super capacitors came in the late 2020's that the wearable Exoskeleton to come into its own.

Once freed from the tyranny of frequent and lengthy recharge periods, Exoskeletons started to appear in ancillary military roles, as well as finding use amongst civilian authorities and early responders.

Exoskeletons are still a common sight on the battlefields and in the hands of civilian authorities around the world, despite draw downs in the number of Human troops used since the wide-spread adoption of the General Purpose Infantry Unit in the 2050's.

Due to their ability to protect their Human occupants from forces acting on their frames, Exoskeletons allow for the use of technology like the Laser-based Propulsion System, granting greater manoeuvrability to troops in combat. 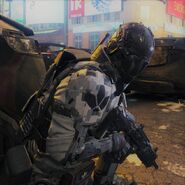 Griffin, with an exoskeleton harness visible on his right arm.

Nomad, his mechanical exo-suit harness visible on his arms.

A Warlord's advanced exoskeleton on display.