This lane is closed and has train barricades. Over the course of time within the match, a dynamic map event will occur where the train barricades will automatically lower down and an active bullet train will pass by rail killing anyone who comes on it's way. When this happens, there are some advantages that can be utilize. One of which is that it gives enemy sight blockage providing enough time to move out of the way. It is possible to throw a C4 to the train and luckliy get a kill. It is possible to survive the fast pace bullet train when one is wedge to the side rail of the main hall and it is also advised to avoid touching the train. 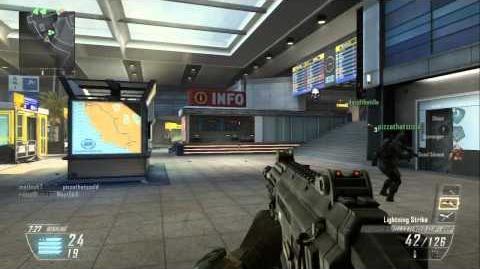 Retrieved from "https://callofduty.fandom.com/wiki/Express_(map)?oldid=2448753"
Community content is available under CC-BY-SA unless otherwise noted.