The MP40's Extended Magazines attachment is called Dual Magazines. It is by far the most-commonly used attachment on the weapon, as it allows constant firing for roughly 8–9 seconds.

The Thompson's Round Drum.

The MP40's Dual Magazines attachment.
Add a photo to this gallery

The Extended Magazines return in Call of Duty: Modern Warfare 2. It's unlocked by getting 40 bullet penetration kills while using FMJ rounds for primary weapons, or it is obtained by getting the last marksman challenge for handguns, machine pistols, and shotguns. It is compatible with all weapons in the game except for the launchers, the .44 Magnum, Desert Eagle, Model 1887, Ranger, and the Riot Shield.

The increase in magazine size that is given depends on the gun. Generally, it increases magazine size by 50%, but with some weapons it can increase magazine size by a greater amount. The attachment also does not increase starting ammo capacity unless paired with Scavenger Pro. A recommended weapon type to get Extended Magazines for is light machine guns, being that they have enormous ammo capacities, and the best penetration in the game. However, it is not recommended with assault rifles or SMGs, because most players tend to reload after each kill, though it can be useful if the player does a lot of spraying. The P90 becomes almost similar to a light machine gun with Extended Magazines due to its already large 50 round magazine being turned into a 75 round magazine, which allows the user to hold down choke-points, but has a much quicker reload than the LMGs. While using Extended Magazines on the P90, a player can sprint for a longer period than normal (patched on PS3/X360, still available on PC). This allows users to equip another first tier perk instead of Marathon like Sleight of Hand or Bling. The P90 is the only weapon which gains this advantage. The AA-12 in particular has a very small magazine to balance it, so Extended Mags (which doubles its capacity to 16 shells) are extremely popular among those who have unlocked it.

Ammo Per Magazine With Extended Magazines

Unlike in Call of Duty: Modern Warfare 2, the magazine model changes when Extended Mags are used, just like in Call of Duty: World at War. A notable example of this are the HK21 and RPK, where they will be given drum magazines and be called "HK21 Drum Mag" or "RPK Drum Mag." The M60 is also given the name "M60 Big Ammo." Other weapons will be shown using longer magazines. The exception to this are the M14 and the M60, which do not use a different magazine model.

HK21 with Extended Mags.
Add a photo to this gallery

The Extended Mags returns in Call of Duty: Modern Warfare 3. It increases magazine capacity, and now increases the starting ammo count as well, instead of previously decreasing spare ammunition and putting some rounds into the first magazine. Extended Mags also increases the maximum amount of spare ammunition a player can hold. It almost always increases magazine capacity by 50%, with only 3 exceptions: the AS50, L118A and MSR at 40% increases (although the ammunition in reserve for these 3 sniper rifles is actually increased by 50%). 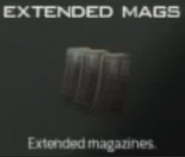 Extended Mags in Create-A-Class from the COD XP build. Note that it's using the same icon from Modern Warfare 2.
Add a photo to this gallery

Extended Mags returns in Call of Duty: Black Ops II as Extended Clip; it increases the magazine's capacity like before. However, unlike the previous games, the capacity is increased by lower than 50%; fortunately, the attachment still gives extra ammo.

Retrieved from "https://callofduty.fandom.com/wiki/Extended_Mags?oldid=1830406"
Community content is available under CC-BY-SA unless otherwise noted.