Extinction is a game mode featured in Call of Duty: Ghosts. The game mode features up to four players fighting aliens in a post-apocalyptic world. Players have objectives, which are to destroy alien Hives & complete Challenges. Players also earn money by killing aliens, destroying Barrier Hives or searching Search Piles. The money earned from these can be used to purchase additional guns placed through out the map (similar to Zombies) and use abilities selected pre-game.

The traps that can be used against the aliens are the electrical fence and fire trap. The traps cost money to set and only last for a short period of time. The traps do not have a cooldown time and can be used as often as the player wants provided they have the money needed.

There are four classes for the player to choose from, Weapon Specialist, Tank, Engineer, and Medic. For each class there is a specific set of unique abilities/perks that the player will be able to utilize for themselves or their team. There is also loadout slots that players can choose different options from including: Pistol, Ammo Type, Team Support, Strike Package & Equalizer, the player also passively has On the Go & Resilience. Once the player completes level thirty, they will automatically prestige, allowing them to equip an additional Relic, once per prestige. The mode is not infinite round based like Zombies but has an ending and is much more linear, although the ending is optional.

The base money gained is determined by the type of enemy killed & is then multiplied by how or where the enemy was killed. If two of the same type of multipliers apply then only one applies to the money given, if a positive & negative multiplier apply then the base money is given. An additional multiplier of 0.3x is added to any alien that spawns in the Cabin area of Point of Contact. Also, the player can only hold $ 6,000 at one time, unless they fully upgrade their Engineer class, in which they could hold $ 8,000.

After destroying all fourteen hives, starting the nuke after destroying the last hive, and then running back to the initial starting point for extraction within the time limit.

) - Escape with all four players

) - Reach the exfil chopper with 1 minute and 30 seconds or more remaining on the clock.

) - Complete all Extinction challenges and escape.

) - Get 50 kills with the electric fence and fire traps in a single game.

The Extinction mode as seen in the Squads trailer. 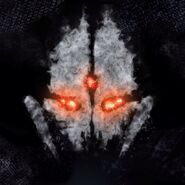 Soldier preparing to defend the Drill.
Add a photo to this gallery

Retrieved from "https://callofduty.fandom.com/wiki/Extinction?oldid=2036214"
Community content is available under CC-BY-SA unless otherwise noted.