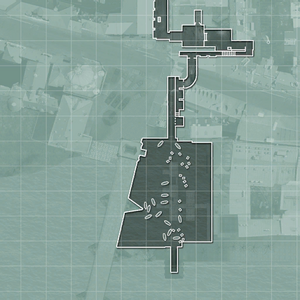 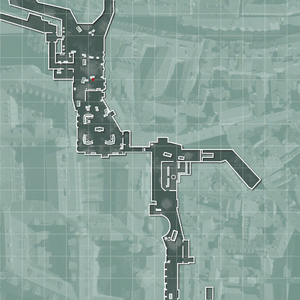 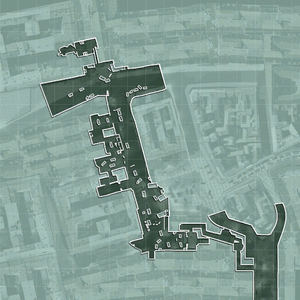 "Maneuver behind enemy lines to the church tower."
— Level description

"Eye of the Storm" is the thirteenth mission of Call of Duty: Modern Warfare 3. The player controls Yuri as he and Soap stealthily move through Prague as they help the resistance until they get to a tower, where they will provide support for Price in the next mission, "Blood Brothers".

The mission begins with Yuri, Soap and Price sitting in part of the Prague sewers. Expecting to reach the resistance, they jump into the water and swim out of the sewers. On nearby board walks, Russian soldiers have taken prisoners. To avoid being seen, the three swim quietly, using boats for cover. However, their progress is halted when they have to wait as Czech prisoners are executed on the board walks above. After the soldiers pass, they continue to swim through the corpse filled water until they reach another sewer. Inside the sewer, members of the Czech resistance are waiting along with Kamarov. They help the three out of the water, and Soap complains to Kamarov about his information being wrong. Price stops the argument and sends Yuri and Soap off. They pass through a tunnel until they reach an alley where there are multiple Russians patrolling the area. The pair hide in the shadows, waiting for an opportunity. One does, when four of the guards in the area break off and move away. Yuri eliminates the two snipers on the roof, and Soap takes out an attack dog and its handler.

With no time to hide the bodies, Soap and Yuri hurry through the alley until they reach a gate, where they spot more Russians taking civilian prisoners. However, there are too many enemies, so the two take a right and head down a narrow street. A two man patrol appears ahead of them, and using co-ordinated shots, dispatch them easily. Moving up the street, Soap spots a sniper on the rooftop. At the same time, a Russian helicopter flies over so he and Yuri move into a building on the opposite side of the street. Soap contacts Price and warns him of the multiple snipers on the rooftops, and exits the building. While moving through the street, the two see the shadow of a patrol and hear an enemy BTR. They quickly hide around the corner, and Soap decides the force is too large for a confrontation. He opens the door of the store next to them. Going prone, they crawl under the shop's windows, avoiding the light of the torches used by the patrol. Russians enter the shop and an enemy dog jumps at the window outside. One of the Russians inside the store walks up the window and argues with the dog's handler, and moves on. The pair crawl round the side of a display case, and more Russians enter. The hostiles see a wounded civilian and execute him. Once these hostiles have passed, Soap and Yuri exit the shop quickly.

Sprinting past a BTR, they arrive at a fenced off alley. The two vault the fence and Soap is confronted by a patrolling Russian, but he quickly kills him and hides the body. In the nearby courtyard, there are a large number of Russians and a helicopter dropping off a BTR. Soap spots a sniper and his spotter on the rooftops and aims his sniper, but before he can take the shot, Price and Kamarov appear behind the enemies and take them out. In the street, Soap and Yuri watch as a large group of Resistance fighters appear on the rooftops and in the windows of buildings. They open fire, killing many hostiles. The transport helicopter is hit by an RPG, and drops the BTR, destroying it. Resistance members pour out from nearby buildings, and flood the courtyard, while Soap and Yuri move up to a statue. Advancing with the resistance, Russian helicopters and trucks appear, with reinforcements. Price spots a BTR as it rolls into a nearby street. Soap draws the armored vehicle's fire, and Yuri grabs a nearby RPG and destroys the BTR. More enemy reinforcements pour in, and Soap and Yuri exit the street via a gated alley.

They move into a building held by the resistance, where members are fighting heavy Russian forces outside. The two move upstairs, and the building shakes under the fire of enemy vehicles. The pair move down another staircase and into a courtyard. Outside, Resistance fighters are being cut down by two machine gun emplacements in the building opposite. Using his sniper rifle, Yuri kills both gunners, and the Resistance fighters move up. However, the rapid advance is halted by an enemy tank, which starts to kill off the Resistance. Soap and Yuri make a dash for a nearby art gallery. Leaving the art gallery, and heading into the street, they see more armor moving up the road, so they enter a store. They stay quiet, and move through into another room, where more Russians are walking past outside. However, they enter the building, and Soap and Yuri are forced to kill them to proceed. Running through the building, they exit onto a wide street, with the church opposite. Soap and Yuri are forced to hide as a large group of resistance members flee down the street, being pursued by a force of Russian infantry and armor. They reach the church, and start to prepare themselves for the assassination. 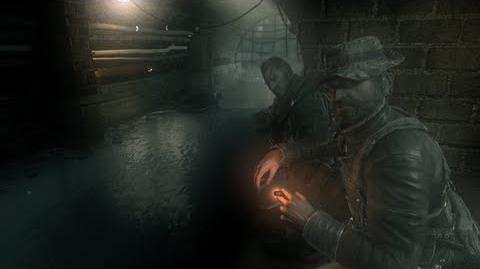 32. This intel is just inside the hotel entrance guarded by two men. There's a sniper watching the street out front, so move quickly to get inside and grab the intel off the front desk in the hotel lobby.

33. In a courtyard where Czech allies show up on the roof above to help take out a huge enemy force. Search around the cafe tables in this area's left side. The one that has the intel on top of it is near a statue and has an umbrella. 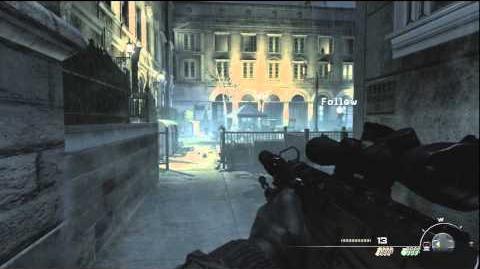 Main article: Eye of the Storm/Transcript 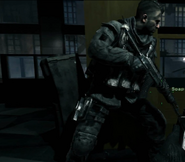 Kamarov in Eye of the Storm.

BTRs parked in Prague.
Add a photo to this gallery

Retrieved from "https://callofduty.fandom.com/wiki/Eye_of_the_Storm?oldid=2495628"
Community content is available under CC-BY-SA unless otherwise noted.