S.S.D.D., Team Player, The Only Easy Day... Was Yesterday, The Gulag, The Enemy of My Enemy, Just Like Old Times, Museum, Hunter Killer, Goalpost, Iron Lady, The Hunted

The F-15 Eagle is commonly seen in campaign, most notably providing Close-Air Support in "Team Player"; it is also spotted performing SEAD operations during the assault on the Gulag and during the mission "The Only Easy Day... Was Yesterday"

In "The Only Easy Day... Was Yesterday".

Side view of the Eagle in "The Only Easy Day... Was Yesterday".

Eagles parked in a Boneyard.

In the Battle of New York, F-15s are spotted dog-fighting with Russian MiG-29s; they are also seen destroying a Russian base and several SAM sites at the start of "Hunter Killer". They are seen once again in "Iron Lady" attacking the invading Russians and rescuing the AC-130 Gunship from MiG-29 attacks. Furthermore, some F-15s can be seen if the player uses noclip in Stay Sharp and Charges Set; however, they are not solid objects.

The F-15 appears in Modern Warfare 3's Multiplayer as the Assault Package's 6-point reward, the Precision Airstrike. Much like its predecessor, three planes will fly in a straight direction of the spot where it is launched by the player who called it and drop their payloads. Getting a Game Winning Killcam with this earns the winner the "Finishing Touch" Challenge and 2500exp. Killing 5 enemies at once will earn the "Carpet Bomb" Challenge and 5000 exp. Calling in two Airstrikes in a single match will earn the "Afterburner" Challenge with 2500exp. While in Prestige, getting a certain number of kills will earn the "Carpet Bomber" Challenge of different levels.

The Precision Airstrike compliments well with the Predator Missile and the Attack Helicopter as a 5-6-7 Point Streak combo. With Hardline Pro, the two-assist-kill ability makes it much faster to achieve the combo in 4 points. Land a kill with the Predator Missile to earn the Airstrike. Call it in on a high traffic area to get your 6th point to earn the Helicopter, then call the chopper to gain additional kills as it flies around the map.

A F-15 Eagle in the "Hunter Killer" cutscene. 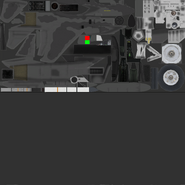 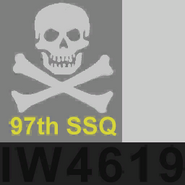 The F-15 makes a single appearance in the level The Hunted, where four F-15s escort the Y-8 gunship that extracts Rorke from the Ghosts' plane.

On the map Showtime, F-15s are the jets used to drop the care packages when the Slot Machine care package or the "jackpot" icon is chosen.