One Shot, One Kill (chronologically)

Pick up a rifle from the table.
Enter station number 1 and aim down your sights.
Shoot each target while firing from the hip.
Shoot a target through the wood.
Shoot each target as quickly as possible.
Get a pistol from the same place you got the rifle.
Switch to your rifle and then back to your pistol.
Melee the watermelon with your knife.
Go outside and report to Sgt. Newcastle.
Pick up the frag grenades.
Enter the safety pit.
Throw a grenade into windows two, three and four.
Pick up the rifle with the grenade launcher attachment.
Return to the safety pit and equip the grenade launcher.
Fire at the wall with number one on it.
Fire your grenade launcher into windows five, six and seven.
Pick up the C4 explosive.
Plant the C4 explosive at the glowing spot.
Run the obstacle course.
Use your objective indicator to locate Captain Price.
Climb the ladder.
Equip the MP5 and pick up 4 flashbangs.
Slide down the rope.
Clear the cargo-ship bridge mock-up.
Debrief with Captain Price.

(Bold objectives are optional and exclusive to the Remastered edition.)

Cardboard men and possibly a car.[1]

"The world's gone to hell, and we have to train a fresh new guy from Selection. Let's see how he does in the cargo ship drill."
— Call of Duty: Modern Warfare Remastered level description

This is the first mission, where the player plays as "Soap". The player is at Credenhill, England, where he begins his training with Gaz. Gaz teaches the player how to shoot, aim down the sights, shoot from the hip, shoot through cover, transfer one's aim, to use a sidearm, and to use the knife.

The player then gets to meet Captain Price along with other members of his team when they instruct him to do the CQB test. The CQB test is a "mock-up" of the cargo ship, based on the ship the player will infiltrate in the next mission, "Crew Expendable".

A Blackhawk that landed around the map 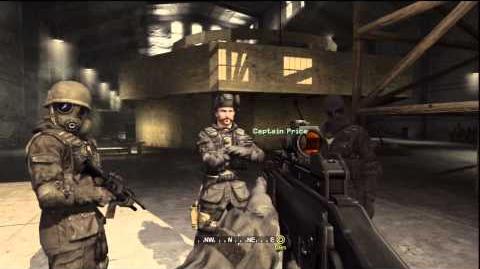 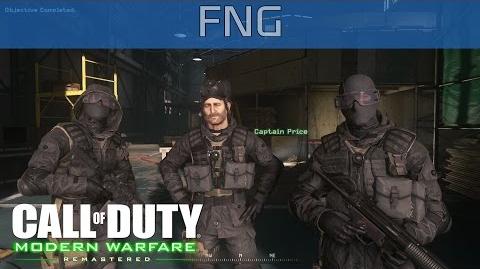