The first time the F4U appears is in the level "Little Resistance" when they are seen flying over the LVT's landing at Peleliu. Many are witnessed being shot down by the Japanese Triple 25 anti-aircraft guns.

The Corsair makes its next appearance on the campaign level "Hard Landing". At the beginning of the level, there is one crashed in the swamp. When a Marine goes to investigate the pilot's body, he trips a grenade which launches a Japanese ambush. The grenade kills three Marines, and dazes a fourth one for a few seconds before being killed by a Japanese soldier. At the end of the level several Corsairs drop incendiary bombs on the attacking Japanese convoy, ending the level.

Multiple Corsairs can also be seen on the level "Black Cats" where they defend the American fleet from Japanese A6M Zeros. The Corsair's last appearance in the game comes at the end of the mission, when reinforcements arrive to aid the fleet.

In multiplayer, the Corsair is only seen on the map Airfield. If the player walks forward out of the bunker, the crashed plane is a Corsair. It is actually the same plane model from the jungle in "Hard Landing," but with no dead pilot or rigged grenade.

In the canceled level, "Fly", the player had to control an F4U Corsair. 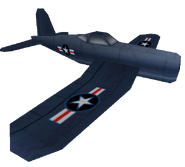 The F4U Corsair appears in the map Zetsubou No Shima. Several crashed Corsairs are scattered across the map and one can be seen frequently in a dogfight with a A6M Zero in the skies.