The FAD's has medium-high accuracy with medium-low damage, along with a high fire rate.

The FAD can be seen in the hands of the Africa Militia forces during the mission "Back on the Grid". It is always seen with a Red Dot Sight attached.

The FAD is unlocked at Level 78 in Call of Duty: Modern Warfare 3's multiplayer, being the last assault rifle unlocked. The main feature of the FAD is its high rate of fire of 1016 RPM, tied only by the burst of the Type 95. Offsetting this high rate of fire is the FAD's very low damage. The FAD is the only assault rifle to feature a mere four hit kill at short range, giving it the lowest damage in its class. The recoil and the centerspeed are the same as the M4A1, but the FAD has a higher rate of fire and thus more recoil. Using the Kick weapon proficiency brings the recoil on par with other weapons. The FAD also has the largest magazine in its class, coming in at 40 rounds that compensates the high rate of fire. However, the reload is slow. The iron sights on the FAD are peculiar, but still very clear.

Infinity Ward has released a hotfix that buffed the FAD's damage to a four shot kill, the FAD will now require four shots at any range making it similar to some Light Machine Guns in that aspect. The FAD also had it's range increased to be much more on par with most of the assault rifles. Interestingly, the FAD has the second highest headshot multiplier of any weapon in the game (behind the Skorpion and MP9) at 1.7x, making it a two hit kill to the head at close range and a three hit kill to the head at long range. Prior to a patch, adding any underbarrel attachment to the FAD lowered its rate of fire.

The FAD is available for both Survival and Mission modes.

The FAD is an enemy weapon in the Mission Mode challenge Fatal Extraction.

The FAD is also used by heavy commando troops in later waves. It is a very strong weapon at close to mid range, but its high recoil leads to a loss of accuracy at range. The attachments for the FAD are the same for all assault rifles. In Survival Mode, it is quite effective due to the fact that it has a 40 round magazine and has higher overall ammo and more ammo can be picked up in later rounds. After wave 30, all heavy commandos are equipped with one and it is used by them for the remainder of the match, meaning that it can be used by the player without having to pay $750 for an ammo refill.

First person view of the FAD.

Reloading the FAD. (Note the 2D cartridges in the magazine).

The FAD seen in third person.
Add a photo to this gallery

The FAD returns in Call of Duty: Ghosts.

The FAD appears in multiple missions, being used by the Federation. 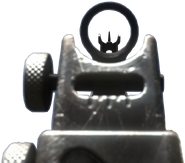 FAD in first person with Red Dot Sight attached. Note that it has a Grenade Launcher, and two pieces of equipment, which is not possible in normal multiplayer.

Pickup icon.
Add a photo to this gallery

Retrieved from "https://callofduty.fandom.com/wiki/FAD?oldid=2045893"
Community content is available under CC-BY-SA unless otherwise noted.