For the re-imagined version in Black Ops III, see FFAR.

This weapon was originally intended to be included in Call of Duty 4: Modern Warfare, but was cut during development. Reference to this weapon can be found in the script files for Immediate Action.

The FAMAS (referred to as FAMAS F1 in the game files) is found in several levels throughout the campaign, often used by Ultranationalists or Russian Military. In some places, the player can find it with the White Tape Camo, which is unavailable in multiplayer. It is a highly effective weapon, due to the ability to quickly dispatch most enemies with a single burst. However, it is a rare weapon and usually only found in the later missions of the campaign (though occasionally it can be seen in "Cliffhanger"), and it is the rarest weapon in the game when it is outfitted with Woodland Camouflage, which can only be found in "Loose Ends." It can also be found in the campaign missions "Contingency" and "Museum", where it can be seen with White Tape Camouflage.

With Stopping Power equipped, the shots to kill at all ranges reduces by one, making the FAMAS a one burst kill at any distance, and, for the most part, a two shot kill.

The FAMAS has odd accuracy traits. The iron sights are clean, and the recoil is quite low, kicking uniquely upwards; however, the FAMAS has a very low centerspeed value of 1200. In conjunction with the high rate of fire, the FAMAS' recoil will climb during the burst. The recoil will resettle between each burst, but overall, the FAMAS' accuracy plays second chair to the M16A4, the FAMAS' biggest competitor.

The FAMAS has average handling traits. Its switch speeds are moderately good for an Assault Rifle, the FAMAS aims in a quarter second, the FAMAS has a moderately sized hip-fire spread, and the FAMAS will allow the user to move at 95% of the base speed, and 38% when aiming. The FAMAS' reload speed is bad, however, and is tied for the slowest assault rifle reload with the F2000, taking at least 2.06 seconds to Reload Cancel the FAMAS. Due to the FAMAS' burst fire, high damage nature, reloads won't be too frequent, but will place the player in danger in a heated gunfight.

The FAMAS' magazine capacity is the typical thirty rounds. The player will spawn in the game with three magazines total for the FAMAS.

The FAMAS gets the typical assault rifle attachments on offer. The Grenade Launcher is a very powerful attachment, and the FAMAS, which isn't completely reliant on Stopping Power, can do well on an explosive class. The Shotgun is not very useful at all in core game modes due to its poor damage, making the FAMAS the more reliable weapon from the hip. However, the shotgun's extreme range and damage characteristics make it a deadly choice in Hardcore, where one shot kills become exponentially more reliable.

The low zoom sights are good choices on the FAMAS, due to its dependence on one burst kills. The Red Dot Sight and Holographic Sight are good choices should the player want them. However, it is inadvisable to use the ACOG Scope or the Thermal Scope, as the FAMAS' already terrible centerspeed is reduced even further, making one burst kills much less consistent.

The Silencer is a decent attachment to consider on the FAMAS. Even with a Silencer equipped, the FAMAS has respectable range, making it a good weapon to use a Silencer on.

FMJ makes the FAMAS much more effective at shooting through thin cover. FMJ is the best overall attachment on the FAMAS, as it compliments the weapon's powerful playstyle and gives the player a powerful advantage by being able to shoot enemies with extreme effectiveness through walls.

Extended Mags is a good attachment which simply isn't needed on the FAMAS. The FAMAS isn't a glutton for ammunition, especially due to how efficient the FAMAS is at using ammo. In most cases it'll be unnecessary, but nonetheless, doesn't hurt to use.

The FAMAS in first person. 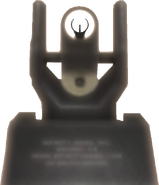 The FAMAS with White Tape Camouflage.

The FAMAS in third person. Note the unique White Tape Camouflage.
Add a photo to this gallery

The FAMAS returns in Call of Duty: Black Ops, this time as a fully automatic weapon with an un-capitalized name, as the Famas.

The Famas can be found in the later missions of Call of Duty: Black Ops, such as "WMD", mainly carried by CIA and Spetsnaz operatives, with various attachments. In the level "Redemption," a Famas with a Reflex Sight and Dual Mags is Mason's primary starting weapon.

The Famas is the fourth assault rifle unlocked in Create-A-Class, and is available for purchase at level 14.

In terms of damage, the FAMAS has a lower damage per bullet than other Assault Rifles, on par with the Enfield and the AUG. The FAMAS can achieve a three hit kill to the body and head up close, but at a range, the Famas will require four bodyshots to kill an enemy, or three headshots. The range of the weapon is on par with the Enfield and AUG as well, as it's inferior to the other assault rifles. To counterbalance this low damage and range, the Famas has a devastating rate of fire. At 937 RPM, even SMG's will find themselves hard pressed at close-range.

In terms of accuracy, the Famas has a mixed bag of accuracy. It has extremely clear chevron sights, and the recoil profile is very small. However, the FAMAS has a high fire rate and a decent centerspeed, making recoil accumulate quickly with automatic fire. A disciplined aim will be needed to keep the FAMAS under good control.

Handling speeds of the Famas were nerfed, and are lower than other assault rifles. The Famas has the regular movement speed of assault rifles, but the ADS time is half a second slower than every Assault Rifle, and the hipfire spread is larger than every assault rifle, barring the FN FAL, making its close range capabilities somewhat less useful than an AUG. As well, reload times are rather slow, at 2.5 seconds/3.3 seconds, depending on a dry/full reload, respectively. Due to the Famas' gluttonous need for ammunition, these slow reloads will be very frequent.

The Famas gains the usual assortment of weapon modifications, underbarrels, and optical sights. The Red Dot Sight and Reflex Sight provide an alternative means of aiming with the Famas if the weapon's iron sights are disliked. Which one is selected is up to preference of the player.

The ACOG and the Infrared Scope are the long range optical sights. The Famas' ACOG and Infrared Scope are both American. The centerspeed and aim down sight speed are lowered, making them overall bad choices, especially on a weapon unsuitable for long distance.

The Suppressor gives the Famas a stealth factor, and removes muzzle flash. Due to this having minimal effect on the Famas' time to kill, it is often seen as a pure benefit for the Famas, except if other attachments are desired.

Extended Mags and Dual Mags are both viable options for the Famas. Extended Mags allows the Famas to tackle more enemies at once, while Dual Mags makes the Famas reload faster, and gives it two extra starting magazines, both of which severely assist the Famas' need for ammunition, and makes the player less reliant on Scavenger.

The underbarrel attachments are available, with little surprise. The Masterkey and Flamethrower provide CQC prowess when needed. Unless the Famas user is low on ammunition, these attachments don't help the Famas much up close, as its already one of the most powerful fully automatic weapons in CQC. The Grenade Launcher has a hefty price tag in return for being able to clear interior buildings and objectives with relative ease.

In terms of perks, ones that can patch up the Famas' weaknesses prove to be very useful. Scavenger, especially the Pro version, is a godsend for the Famas, as it'll constantly need ammunition, and its reserve would easily run dry without it. Sleight of Hand Pro and Steady Aim can resolve key handling weaknesses the Famas has, making reloading and aiming much faster, or making hipfire very reliable, respectfully.

In Zombies, the Famas can be acquired only from the Mystery Box for 950 points. It has a high fire rate and power, but ammo becomes problematic as the player is likely to burn through it quickly. As with most weapons, it is most efficient to go for headshots, since the Famas only requires a few bullets to kill a zombie even past round 8. Overall, it's not an ideal weapon to use, as the reserve ammo is very low, added on top of the high fire rate which could leave the player dependent on Max Ammo or their other weapon after one or two rounds. Its killing power is not very hindering, though, and does not require perks to use effectively.

When Pack-A-Punched, it becomes the "G16-GL35". The gun comes with an increased magazine capacity and adds a Red Dot Sight with a happy face reticle but with a random color. It is one of the weaker assault rifle upgrades, having among the lowest bullet power and ammo reserves, only on par with upgraded SMG's. It's killing power is on par with Assault Rifle standards, but you may want to depend on a heavier weapon when ammo becomes an issue. The AUG is a better alternative to this gun, although it will always use the bizarre Swarovski Scope. The only thing this gun excels at in Zombies is killing George Romero, as it has a 9x multiplier on George. 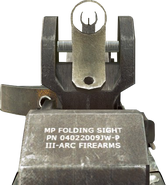 Diving with the Famas.

The Famas in third-person with Ice Camouflage applied. 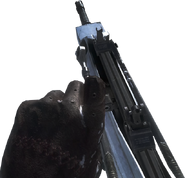 Render of the Famas.

Famas that is equipped with Red Dot Sight and Silencer, in third person

The FAMAS in Call of Duty: Black Ops Zombies.

An early version of the Famas.
Add a photo to this gallery 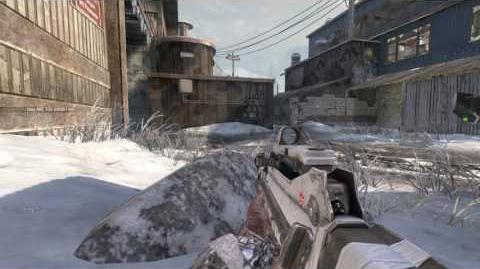 The FAMAS was scheduled to make an appearance in Call of Duty: Modern Warfare 3. It was most likely going to be in the hands of GIGN, and appears to be replaced by the Type 95. It was cut fairly early in development. 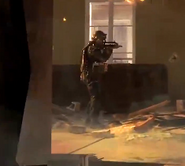 The FAMAS used by a GIGN soldier.

The Famas returns in Call of Duty: Black Ops: Declassified. Not much is different than the Black Ops variant besides a higher recoil pattern. 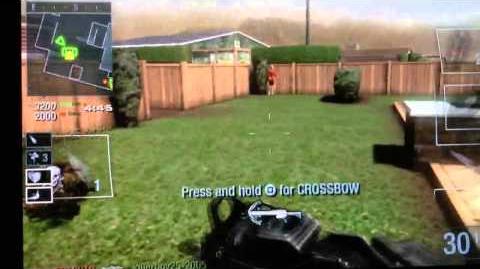 Call of Duty Black Ops Declassified Gameplay for PS Vita
Gameplay with the Famas with a Red Dot Sight.
Add a photo to this gallery

The FAMAS reappears in Call of Duty Online and it now fires in four-round bursts.

The FAMAS in first person

The FAMAS appears in Call of Duty: Modern Warfare as the FR 5.56.

Retrieved from "https://callofduty.fandom.com/wiki/FAMAS?oldid=2488703"
Community content is available under CC-BY-SA unless otherwise noted.