The FFAR is an assault rifle added in Call of Duty: Black Ops III in the May 6, 2016 update.

The FFAR looks near identical and performs rather similarly to the Famas from Call of Duty: Black Ops, suggesting it is a modernized version of it. It has the highest fire rate in its class, which may lead to players running low on ammo frequently. Because of this, Scavenger may be necessary. Firing in bursts or equipping a grip can help reduce the wild recoil greatly. Despite this downside, the FFAR is still a very good weapon, being able to kill in a few shots and capable of dispatching enemies at close range, making it an effective CQB weapon capable of being used at higher distances if precision and care is used. Another major downside to the FFAR is its reload time, which is very slow when compared to its fire rate and other assault rifles in its class. Because of this, Extended Mags or Fast Mags can allow the player to fire longer and spend less time reloading. Its other handling traits are also poor, including sprint-out time, ADS speed and hip-fire accuracy, making Fast Hands, Quickdraw Handle or Laser Sight solid choices. Its iron sights are fairly clear, making optical attachments optional.

Overall, the FFAR performs similarly to the HVK-30, sacrificing handling for extra rate of fire.

First person view of the FFAR 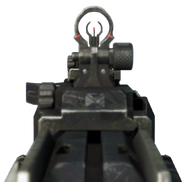 Aiming down the sights of the FFAR 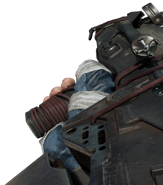 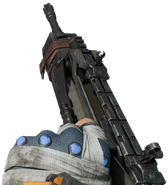 Chambering a round into the FFAR
Add a photo to this gallery
Retrieved from "https://callofduty.fandom.com/wiki/FFAR?oldid=2317704"
Community content is available under CC-BY-SA unless otherwise noted.