The FGM-148 Javelin is a guided missile launcher featured in the Modern Warfare series and in Call of Duty Online. It was cut from Call of Duty: Ghosts and Call of Duty: Advanced Warfare, used in either testing or legacy content.

The FGM-148 Javelin appears exclusively in the campaign of Call of Duty 4: Modern Warfare, most notably in the missions, "The Bog" and "Heat" where the player's objective is to take out four enemy T-72 tanks. It can also be found in "Safehouse", and "All In". It cannot be fired in enclosed spaces, as a message saying that there isn't enough room will appear. Occasionally, such as in "Heat", the Javelin missile can get 'hung up' on a roof if fired too close, due to the missile not having the chance to ignite.

Up-close of the Javelin missile

The FGM-148 Javelin in first-person

Aiming down the FGM-148 Javelin's scope

The FGM-148 Javelin in third-person

West running with a Javelin before his death in "The Bog"

The FGM-148 Javelin returns in Call of Duty: Modern Warfare 2. It appears in the level "Of Their Own Accord", where the player is ordered to snipe Russian soldiers armed with Javelin launchers. Shortly after, the player gets an opportunity to pick up a Javelin and destroy several BTR-80s and Mi-28 gunships attacking the Washington Monument Evacuation Site. The Javelin is later mentioned and heard, but not directly seen in "Loose Ends", where Archer and Toad use them to destroy Ultranationalist vehicles.

A Javelin Launcher is available in the "Museum", but unfortunately the Javelin cannot lock onto any location or object inside the museum and therefore cannot fire.

The Javelin is the second to last launcher obtained, being unlocked at level 50. Similarly to the Stinger, it can lock onto aircraft. A short beeping noise will confirm when the player has a solid lock on anything they see when they aim down the sight. This effectively allows the player to fire in cover, providing there is enough room to fire the rocket. It can shoot down attack helicopters and UAVs in a single hit and the Pave Low and the AC-130 in two. The Javelin can destroy enemy Harriers, although due to the size of the Harrier's fuselage, the Javelin missile may miss and then turn and try to destroy the Harrier in mid-air. If a Javelin missile is launched but is beaten to its target by the faster Stinger missile and no other target remains, it will circle the area with sharp turns and then crash down on the level in a highly unpredictable fashion. Unfortunate players may find themselves committing suicide or team killing to no fault of their own. More fortunate players can be rewarded by a highly unexpected random kill on a target far beyond the line of sight. This risk is, for obvious reasons, compounded on smaller levels.

However, the Javelin has a second function which the Stinger does not have: the Javelin is able to lock onto areas on the ground, effectively making it a sophisticated, shoulder-fired mortar. Once fired, the missile will fly upwards and hit the target area several seconds afterwards, unleashing a fairly large and lethal explosion. When used properly and tactically, a Javelin-user can fire at a safe range and hammer down on a group of enemies. Because of the nature of the weapon, it will always hit the target from above, so make sure the target has line of sight to the sky (in fact, this can even allow the player to hit locations that would normally be sheltered against launchers, such as walled-in rooftops, buildings with derelict roofs, or even skylights on Terminal). It is worth noting that the delay between firing and impact is considerable, even a hindrance to reliably getting kills, so it is recommended to use it more against high traffic objectives like bomb sites or Domination flags. When firing the Javelin, however, the user must be careful to have enough vertical clearance as the rocket will fly forward a short distance then straight upwards. If there is a roof or overhang above and in front of the user, the Javelin will detonate, killing the user and enemies around them. Also an explosion will occur when the Javelin is fired uphill, as it will go straight forward before its ascent. Less frequently, some teams or single players will launch Javelin missiles at the start of a match on a specific area of a specific map or an objective in hopes of killing small or large groups of enemy players.

Unfortunately, while the Stinger missile comes with two missiles upon spawning, the Javelin only has one, making shooting killstreaks like the Pave Low and the Chopper Gunner more difficult since those require two missiles if the trajectory of the fired rocket is not perpendicular to the target (the first missile to expend its defensive flares). The Javelin has an unusual loading behavior. A user can actually carry two missiles, one in reserve and one in the launcher. After spawning, the player's missile is actually in the reserve slot. Upon drawing the weapon for the first time, the missile is loaded into the launcher, opening the reserve slot. Additional missiles can only be acquired if the reserve slot is open. Because of this using Scavenger and the Javelin can be a little confusing. The player must draw the launcher and let the reload complete at least once to get a second missile. After firing, the Javelin will switch back to the primary weapon without reloading. This means that after firing the launcher, a reserve missile, if present, will not be loaded into the launcher by default which means the reserve slot will remain full, which means running over an ammo bag will not increase the user's missile count to two. The user must switch back to the Javelin, wait for the long load animation to complete, then run over the ammo bag to pickup the second missile. The Scavenger perk does not give the Javelin more starting ammo, however the player can run over Scavenger packs at the start to gain the extra rocket if needed.

The Javelin can be useful for different scenarios besides scoring random kills and destroying air support. In objective game modes like Demolition, one can get to a high point and use it on a bomb site if defenders are flooding to the area to disarm it.

The Javelin can be highly lethal in Hardcore both because it kills more readily and because players tend to move less, giving the missile a larger time window in which to reach them. It can also prove disastrous if the player does not take the risk of Team Killing into account. Once launched, the teammates of the player who launched the Javelin have no way of knowing where it is heading. They will have to rely on the player aiming it correctly in the first place and not targeting either where they are or where they are heading. Pressing Start and checking the minimap ahead of firing is vital to avoid excessive fratricide. This is compounded even worse with the Danger Close perk, making the missile's explosion nearly identical to that of a Predator Missile. Due to the very loud report of the missile firing and the massive smoke trail, it can also give away the position of the player and/or their teammates. 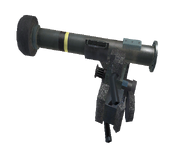 The Javelin in third person view

Locking on to a target 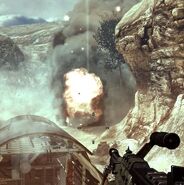 The Javelin makes an appearance in Call of Duty: Modern Warfare: Mobilized as one of the two launchers in game, the other one being the RPG-7. In game, the Javelin is available exclusively to the campaign, though used more extensively than on the console versions. The Javelin is only used in the levels "Interception" and "Hostile Territory". Despite being in these missions, its use is limited only to the vehicles the player is ordered to fire upon. Even after cornering the nuke's vehicle in "Interception", the nuke will be set off anyway by the militia there. Upon firing the Javelin, the ADS button on the touch screen disappears, preventing one from using the ADS until a fresh rocket is loaded.

In terms of function and power, it is the same as the console versions, but it differs slightly in appearance. Possible targets are shown in black boxes instead of green, there are no arrows pointing to the targets that are out of view, there is a yellow cross-hair on the screen, and there is no restriction to where it can be fired. But when fired in an enclosed area, the player can kill or injure themselves.

The Javelin on DS

The Javelin is found in the level "Iron Lady" to take out tanks on the bridge near the end of the level. It can not lock on to the ground. Its only available targets are the tanks and the choppers that drop in additional ground forces.

The Javelin deals the most damage of any explosive weapon in the game, and its power is only rivaled by killstreaks like the AC-130 and Predator Missile. However, its main drawback is that the missile has a seven second travel time, as it must fly high into the air before rocketing downward. Therefore, the Stinger may be a better choice to shoot down air support, as it has a linear flight path instead of a top-down attack. Other drawbacks of the Javelin are the fact that it is disabled by enemy EMPs and cannot be replenished with Scavenger, making it a one-shot weapon unless the player picks up another from the ground.

The Javelin's long air time also means that if locking onto a ground target, one must anticipate and aim where enemies will be. Locking on to objectives such as Domination flags and bomb sites for Demolition can be very effective and easily give the user multi-kills.

Some of the perks that work well with the Javelin are Blind Eye Pro, which makes it lock on to enemy air support much faster, which compensates for the Javelin's long lock-on time. Quickdraw can also be useful, speeding its extremely slow aim time.

As of Title Update 1.15 on the PS3, the Javelin can no longer lock-on to Juggernauts and Assault Drones.

First person view of the Javelin

A player removing the lid

Aiming the targeting system of the Javelin

The Javelin makes an appearance in Call of Duty: Modern Warfare 3: Defiance. It functions just as the same in the previous Call of Duty titles. It is used in the mission "Through the Mountains" to stop mobilizing Russian armor and troops.

Single-shot
The Javelin returns in Call of Duty Online.

The Javelin in first person

The Javelin locked onto a target

The Javelin is not playable within the game, although it is loaded solely into memory for multiplayer in Ghosts, suggesting it was used to test launchers and how pointstreaks respond to them. In Advanced Warfare the Javelin is loaded into the memory of several campaign levels. The model is taken from Call of Duty: Modern Warfare 3, as one can tell from the green/grey/black bands on the Javelin's body.

The Javelin appears in Call of Duty: Modern Warfare as the JOKR. It has the highest accuracy and range in its class. Now, instead of firing like normal, the missiles take a top attack that destroys armored vehicles faster and easier. It can also be locked onto players.

The JOKR in first person.

The default scope of the JOKR.