The FHR-40 is a Kendall Ballistics bullpup submachine gun in Call of Duty: Infinite Warfare. It is reminiscent of the P90 in previous games.

When all side missions are completed, the FHR-40 unlocks the FMJ Rounds upgrade, which allows fired rounds to penetrate thin walls and fire through cover.

"Full-auto ballistic firearm. Offsets a modest range with an extreme rate of fire thanks to a unique magnetic bolt carrier."
— In-game description.

The FHR-40, along with the Erad, is the first SMG to be unlocked in Infinite Warfare. The FHR-40 has the highest rate of fire in its class, being the fastest firing primary weapon in the game (bested only by the classic Hornet pistol). This is explained by the weapon having a unique magnetic bolt carrier. It also has the second largest magazine capacity in its class, bested barely by the Karma-45. As well, since the FHR-40 is an SMG, it comes with the handling benefits associated with the class. However, this is offset by the FHR-40 having the most recoil and the lowest range in its class. It is worthwhile to note that the only way to acquire the FHR-40's variants are through leveling up Mission Teams.

When Pack-A-Punched, it becomes the FHR-420. It gains a larger magazine and fires 3 bullets for every 1 shot fired, giving it an extremely high damage output, ideal for situations of panic or for mass horde clearing. When double Pack-A-Punched it becomes the Contact High.

The FHR-40 in first person 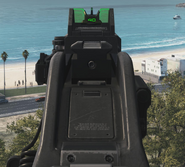 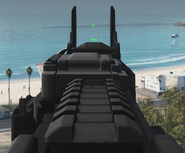