Call of Duty Wiki
Register
Don't have an account?
Sign In
Advertisement
in: Call of Duty: Ghosts Shotguns

None (see here the multipliers added with Slug Rounds)

The FP6 (referred to as FABARM FP6 in the game files) is a pump-action shotgun that appears in Call of Duty: Ghosts.

A unique FP6 without the wooden stock is seen strapped to David T. "Hesh" Walker's back in the missions Birds of Prey, The Hunted, End of the Line, All or Nothing, Severed Ties and The Ghost Killer. However, he is never seen using it, and the weapon itself is not available for use in the campaign.

The FP6 has a highly variable damage profile. It fires eight pellets per shot. Technically speaking, the FP6 can deal one hundred damage per pellet, but the damage starts to drop off after 1/25th of a meter, so realistically, a one pellet kill in core will never be realised. The FP6 will take two pellets to kill up to roughly 6.4 meters, the longest such two pellet kill range in its class. The FP6 will cease to do damage after 11.6 meters. The FP6 has the largest damage per pellet variance by a wide margin across all shotguns, so damage dealt with the FP6 will vary wildly depending on the range to the target. The FP6's one pellet kill range in hardcore ends at roughly 8.5 meters.

Being pump action, the FP6's fire rate is slow, clocking in at 89 RPM. This is a bit faster than the Tac 12, but is far slower than the Bulldog and the MTS-255. In a one-on-one firefight, users won't have an easy time getting follow-up shots in before being gunned down.

The FP6's accuracy characteristics are tolerable. The iron sights are clear and simple, the recoil is a non-factor since the FP6 fires so slowly that the centerspeed will completely counter the recoil before the next shot, and the shot spread, despite being the second largest in-class when hip-firing or aiming, is not too bad.

The FP6's handling characteristics are pretty good overall, but somewhat below average for a shotgun. The weapon moves at 100% of the base speed, aims down the sight in 200 milliseconds, has a 200 millisecond sprint out time, and reloads per shell, taking 0.33 seconds for the animation to start and 0.85 seconds for each shell to be inserted. At max, the FP6 will take 4.58 seconds to reload if all five shells are loaded at once. Although this speed sounds bad, the FP6 can be partially topped up to mitigate a full tube reload; combined with the fact that the FP6 is both ammo efficient and has a slow fire rate, reloading is less common.

The FP6 has a small tube capacity, holding just five rounds in the tube. It also cannot accept Extended Mags to increase the FP6's tube capacity. The player will spawn in with twenty rounds total, fifteen in reserve and five being loaded in the weapon on spawn.

Apart from the lack of Extended Mags, the FP6 has the standard assortment of attachments on offer. Both the Red Dot Sight and Holographic Sight are available, although the FP6's iron sights are pretty clear and the FP6 isn't reliant on precision fire. The sights are only useful on a Slug Rounds build if the user doesn't like the iron sights.

The Muzzle Brake is easily the strongest attachment on offer for the FP6. As the shotgun has a finite range and relies heavily on its two pellet kill range to have an edge over other shotguns, the attachment is a must-have to boost the FP6's performance. The Silencer is the polar opposite story. Unless stealth is an absolute mandate on the player's class setup, this attachment should be avoided at all times.

The Foregrip decreases the FP6's recoil values per shot. As the recoil on the FP6 is countered completely by the centerspeed and slow fire rate, the Foregrip is not needed.

Slug Rounds convert the FP6 to a slug firing shotgun. This slug round has an enhanced one shot kill range and a severely enhanced maximum damage range at the expense of not firing multiple pellets per shot. Overall, this attachment's benefits will not outweigh the loss of the FP6's close quarters niche.

The FP6 appears in Extinction in Point of Contact, near the hive next to the building for 1500 points. In Mayday it is located at the starting area, leaning on a crate.

The FP6 has a very high damage per shot, being capable of one shotting scouts and even scorpions when using the Weapon Specialist and the right type of ammunition. It also downs hunters very quickly, although the user usually can't one hit kill a Hunter without the maximum amount of damage possible. The FP6 is reliant on engaging cryptids at a very close range in order to be effective, as its damage drops off quickly. The FP6 benefits tremendously from the Muzzle Brake and ARK, if found. The user's pistol or alternate weapon should be relied upon to tackle distant targets.

The FP6's slow reloads and high damage per shot make it ideal for someone using the Weapon Specialist.

Compared to other shotguns in the game mode, the FP6 is notably worse than its semi automatic competition. The MTs-255 and Bulldog have a negligible damage and range penalty in Extinction while boasting faster reloads and a much higher damage output. Compared to those two shotguns, the FP6 appears much earlier in the maps it appears in, leaving the player without much of a choice as far as shotguns are concerned. On the later parts of levels, the FP6's low damage output will make it a troubling option when opponents that can't be one hit killed by the FP6 start to spawn, and enemies that the FP6 struggles to kill in one shot become more frequent. The FP6's poor damage output also makes it not ideal for using the Weapon Specialist Upgrade, as the FP6 cannot fire a lot of shots in the duration of the upgrade, with the upgrade mostly just serving as a free reload and five free shells for the FP6. Its poor damage output also makes the FP6 poor for taking on Barrier Hives, as not only does it fire slowly, it will need to reload constantly.

An aspect of the FP6 that can be an extreme disadvantage is that it cannot accept Extended Mags as an attachment. Not only can the FP6 not be used as a means to search for said attachment, but should the user need to purchase a shotgun for the means of a challenge, purchasing the FP6 ensures that, should the player have Extended Mags equipped on their old weapon, Extended Mags will be lost, even if the player has the Keep Valid Attachments armory upgrade activated.

The FP6 appears in Safeguard, and is obtained from Support Drops. It comes with a Red Dot Sight and a Muzzle Brake.

It is only effective in close-quarters; past that it does little damage, usually taking multiple bullets to kill one enemy. It is better for the lower rounds due to its statistics, unless using it in a very close-quarter enviroment.

The model of the FP6

The FP6 in first person 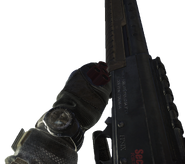 The FP6 with no stock on Hesh's back