For the unit in Call of Duty: Heroes, see FTL Trooper.

FTL is a Cort-Sol combat rig in Call of Duty: Infinite Warfare. The FTL rig is designed for Fluid, Tactical, and Laterigrade (FTL) gameplay with an emphasis on being advantageous over one's opponent. The combat rig also appears as a character in Call of Duty: Mobile.

Along with the Warfighter, Phantom, and Merc, the FTL is one of four combat rigs seen in the campaign, and is used frequently by SetDef troopers both in ground combat and in ship assault missions.

FTL is unlocked for use at level 15. It is the first combat rig to be unlocked aside from the default combat rigs. 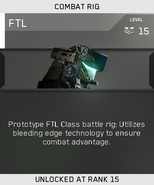 FTL being unlocked in multiplayer.