Survive for as long as possible against limitless wave of Zombies.

"An abandoned research facility has been overrun by Zombies. Unlock its secrets to survive."
— Description

In here, the M14 can be found for 1800 points and the M1891/59 for 300 points, but it is recommended that the player use the Throwing Knife because the zombies in the first round are still weak. There are a total of five windows in this room and each one with a barricade. There is an obstacle (a couch) blocking the path, which can be removed for 5000 points. Removing the couch will give the player access to the second floor.There are 5 windows inside the starting room

This room contains a Mystery Locker (DS version of the Mystery Box) which can be purchased for 950 points and a M16A1 that can be purchased for 2500 Points and also a Remington 870 for 1200 points. There is also a door which leads to the downstairs which costs 10000 points. A good camping spot on this floor is in the small room with the M16A1. In a two-player match, one man watches the window, and the other watches the entrance. There are a total of 5 barricades in this area.

The screens on the monitor room.

The Mystery Locker in the monitor room.

"The end is near" wall writing on the monitor room.

Another view of the lobby. 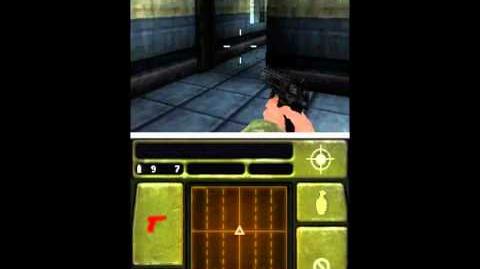