"All Ghillied Up" and "One Shot, One Kill"

Fallen is a multiplayer and Survival map in Call of Duty: Modern Warfare 3.

This decent sized map takes place in an abandoned Soviet compound near the ghost town of Pripyat, Ukraine and is based on the Call of Duty 4: Modern Warfare missions All Ghillied Up and One Shot, One Kill. The compound was abandoned due to the Chernobyl nuclear disaster of April 1986.

Fallen is a large map featured in Call of Duty: Modern Warfare 3. It takes place in an urban environment. The two main spawn points are on either side of the map, near a playground behind some abandoned buildings. The map contains many buildings that can be accessed and used for defensive set-ups and offers close quarters combat. There are many roads that offer long lines of sights. A courtyard is near the center of the map that has lots of vegetation growing in it, that offers moderate cover, but can easily be countered.

In Survival Mode, Fallen is a Tier 3 map and has the difficulty of Hard. The players start with the MP412, two Flash Grenades, a Self Revive, and 250 Armor. They spawn at the north side of the map.The hostiles include Bomb Squads, Claymore Experts, Choppers, and Juggernauts.

The Weapons Armory is on the west side near the cars, the Equipment Armory is in the center of the map, where the first Drop Zone is on Drop Zone, and the Air Support Armory is located near spawn.

A view of the junkyard.

A view of the statue in the middle of the map. 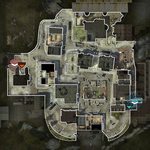 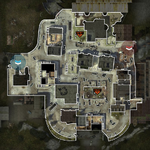 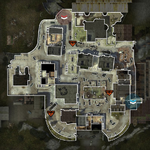 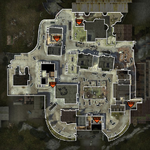 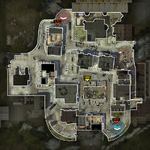 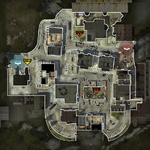