The Fang 45 is a fully-automatic submachine gun that appears in Call of Duty: Modern Warfare Remastered. It was added on the May 2nd, 2017 update as a part of the Operation Lion Strike collection. The weapon is unlocked by completing the Fang 45 bounty in the Depot. Once unlocked, it can be used at all levels and is only available in Multiplayer.

The Fang 45 kills in 3-5 shots depending on range. This improves to 3-4 shots with Stopping Power. Stopping Power, then, has a minimal effect on the Fang 45, benefiting it at close range only when firing through cover or when scoring head shots. At longer rangers, the bulky sights and the moderate recoil combine with the low damage to make killing targets difficult, and Stopping Power alleviates this problem somewhat. At such ranges, however, the Fang 45 is no match for assault rifles or light machineguns.

The Fang 45's most notable advantage over other SMGs is in its unique rate of fire characteristics. Rather than having a constant fire rate of 800 RPM (like the MP5 and the AK-74u), it starts firing the first five bullets at 923 RPM and then continues at 800 RPM. After the first five shots have been expended, however, The Fang 45 becomes essentially a weaker MP5 or AK-74u, with the same rate of fire but weaker bullets, a shorter range, and a slower reload time.

The perk Sleight of Hand is very beneficial for the weapon due to its extra-fast firing initial bullets, as well as counteracting the slower than average reload time. This is particularly true for the Fang 45 as Stopping Power has such little effect on the weapon. Bandolier is beneficial with Sleight of Hand to complement the faster ammo consumption and to take greater advantage of the faster fire rate of the initial bullets. Other strong contenders for the Fang 45 are UAV Jammer for better stealth, Juggernaut for increased durability, or Double Tap to further increase the rate of fire, though this benefit is offset by the higher recoil and ammo consumption rate.

The Fang 45 has a shorter range than other SMGs, and the max/min damage difference is high, so the Silencer attachment may not be the best choice on maps with more open sightlines. The iron sights are quite bulky when compared to those of other SMGs, so a Red Dot Sight may be highly beneficial.

The Fang 45 in first-person 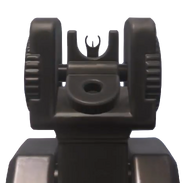