"Karim" (by Barkov and her militia)

"An exceptional soldier who has known a lifetime of war, Farah Ahmed Karim is the founder and commander of the Urzikstan Liberation Force. Her combat capabilities and fieldcraft have been further honed by Tier-1 level training with the SAS."
— In-game biography

In 1999, when Farah was 7-years-old, Russian forces were present in Urzikstan. Farah and her mother were buried by rubble from a Russian artillery strike, killing the latter. Farah managed to survive and was rescued until the Russians began advancing upon the people of Urzikstan. Being carried by her father to their home to prepare for an escape, Farah and her brother, Hadir, were soon on their own when a Russian soldier broke into their home and murdered their father. After killing the soldier and donning a gas mask, Farah and Hadir snuck out of their home, evading Russian troopers and attempting to escape via truck. They were then immediately captured by Roman Barkov, the Russian General responsible for invading their homeland, and were taken into his custody to be imprisoned.[1]

Years later, Farah would go on to become the leader of the Urzikstan Liberation Force (ULF), a group of over 7,000 volunteer freedom fighters determined to free their country from foreign subjugation. To accomplish their goals, the ULF would often fight alongside and receive support from both the US Central Intelligence Agency and the British Special Air Service; the latter of which would establish a working relationship with Captain John Price.

Farah is a founding member and the commander of the Urzikstan Liberation Force, battling foreign occupation since 2010. She is renowned not only for leading the resistance against enemy troops but for establishing protective units to combat terror groups throughout Urzikstan. Under Farah's leadership, civilian militias play a critical role in the fight to return their subjugated population to sovereignty. Her forces comprise male and female volunteer fighters with a maximum age limit. Farah does not allow those under the age of 15 to take part in frontline fighting, but anyone and everyone are invited to undergo military training and join her reserves.

To protect her people from owing a debt to the world, Farah accepts only select funding and equipment from the international community, preferring to keep her forces reliant on their own for material support. Raising her army with little more than commandeered weapons and unofficial support from the SAS's legendary Bravo Squadron, Farah says, “Will is the most powerful weapon.” As a girl, in the opening salvos of the invasion, she and her brother Hadir were captured, spending their teens held as POWs by General Barkov's rogue forces where captives were subjected to forced labor, routinely witnessing acts of chemical experimentation on fellow prisoners.

In 2009, Farah led an escape, fighting alongside a western aide unit. She vowed then to give her life to free her country from subjugation and chaos. When asked if women can be as effective as men in combat, Farah describes the question as sexist and objectifying. Farah wants to give women their rightful place, not only in combat but in a society free from war. For Farah, war is more than the liberation of land. “We are also fighting to free our people from old-fashioned ways.”

Impressed by seeing females in combat and leadership roles, wives, mothers, and daughters fight without pay, food or medicine to follow Farah into battle. Farah's modern beliefs have had far-reaching effects, and occupying soldiers often directly hunt and target her. Labeled a terrorist organization by the Russian government for their long-standing resistance, Russian soldiers are ordered to make no distinction between the terror group Al-Qatala and the liberation fighters under Farah's command. AQ terrorists pursue Farah and the ULF with a mandate to kill as well.

Farah's worldview draws a sharp line of demarcation between herself and the enemy. “The enemy has come where they are not welcomed and taking what is not theirs.” Farah refuses to stage counter-offensives or launch attacks beyond the borders of her country, believing with all her heart that what distinguishes her from the terrorists and the occupiers are never crossing the line from defender to aggressor. “We are a protective force. We are rescuers, not killers.”[2]

Farah is determined to protect her country and motherland. However she does not use motives that are not moral such as using chemical methods or affiliating with the enemies, Hadir used these methods and claimed that he is not her brother anymore and tries to kill him for that. She has the same goal that her fellow Urzikstani people have that to free her country that she was raised in. Farah has good capability of defending herself and even going into war to her enemies that she declares greedy and immoralistic. 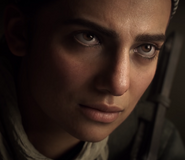 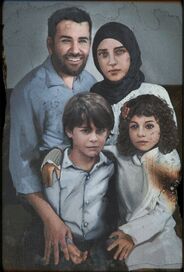 Alex and Farah sharing a smoke in Sundown Cinematic. 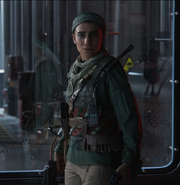 Farah in Into the Furnace

Garrick, Farah, Price and Alex listening to Laswell after killing "The Wolf"

Farah as an operator.

Season Six Promotional image with Nikolai and Farah in Verdansk.

"Stay. Help us go after Zakhaev."

Retrieved from "https://callofduty.fandom.com/wiki/Farah_Karim?oldid=2555863"
Community content is available under CC-BY-SA unless otherwise noted.